Venus spends all month hovering over the horizon in the west after sunset. The constellations move westward behind it from night to night. The planet passes through the Beehive in Cancer on the 3rd and 4th. As it heads 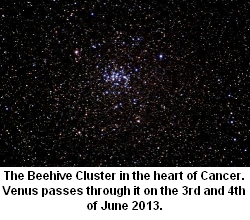 toward Leo, the moon passes the planet on the 10th and 11th. Then Venus is close to the heart of the lion, Regulus, on the 21st.

Saturn is partway up the western side of the sky by Kappa Virginis all month, slowly moving eastward most of the month. The moon passes the two on the 16th, one night after its conjunction and occultation with Spica.

It will be tricky seeing Mars, Jupiter, and Mercury this month. They’re in the morning sky close to the sun’s glare. You may spot the moon close to Mars on the 6th. It will pass by Jupiter later that day, but Jupiter is even harder to see. Jupiter and Mars will become much easier to spot as they draw close to each other during the month. They’re really close on the 23rd with the star Tejat close by. In the feet of Gemini, Castor and Pollux will be to the left of them. Try to find Mercury below. It’s at greatest elongation west of the sun by 19.6° on the 30th.

If July weather isn’t to your liking, think about what the weather may be like five or six months from now. Orion is already rising in the dawn to remind you. The most recognized constellation will rise after sunset and stay up all night around year’s end. For northern hemisphere observers, it’s thought of as a winter constellation. But for those who observe the stars in the early morning, it’s a summer sight.

Southern hemisphere observers may be able to spot some Delta Aquarid meteors. The shower peaks on the 29th and 30th.

If you like a challenge, try to find Pluto at opposition on the 2nd. You need a very dark sky, a big telescope, and precise aim. The former ninth planet is north of the Teapot or Sagittarius and south of Scutum. A last 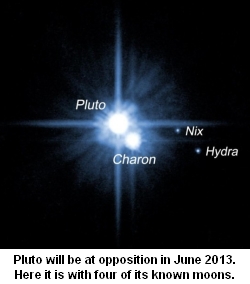 quarter moon rises around midnight, so you’ll get the darkest sky in the evening. The moon will be close to Pluto’s spot on the 21st, but moonlight will spoil the view.

Pluto is usually beyond 14th magnitude. An easier find this month will be the asteroid Flora. It’s at opposition on the 19th. At eighth or ninth magnitude, it’s about as bright as Neptune and within the reach of smaller telescopes and doesn’t require such a pristinely dark sky. Flora is in the asteroid belt between Mars and Jupiter and takes 3.27 years to orbit the sun. You can find it between Capricornus and Sagittarius moving westward.

On July 13 at 14:25 Universal Time on Earth, Mars will go through its northward equinox. We would liken it to the beginning of spring in the northern hemisphere on Earth. Like on Earth, Mars will experience days and nights of equal length around this time. A complete Martian day is 24 hours and 40 minutes.

Earth is at aphelion, its farthest point from the sun, on the 5th. It will be 152.1 million kilometers from the sun. That’s 1.017 astronomical units. One astronomical unit is the average Earth-sun distance. Since our planet has a slightly elliptical orbit, it’s a few million kilometers farther from the sun in July than in January. Many people in the northern hemisphere are surprised to find out that as the weather gets hotter, the earth is getting farther from the sun. Remember, it is coldest at this time of year south of the equator. How hot it gets has much more to do with the part of the planet you’re on being the one that’s tilted toward or away from the sun.