Are you watching the four bright southern objects lined up after sunset? From east to west, they are Antares, Saturn, Mars, and Spica. As a group, they move a little farther west every night this month. However, Mars is moving toward Saturn and will be just south of it on the 24th. It will head to a spot in the sky just north of Antares in September. The moon drops in between Saturn and Mars on the 3rd. 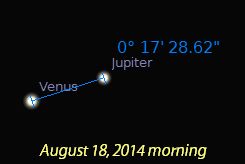 Venus has been a morning object for a few months now. It’s in Gemini. As the twins rise earlier every day this month, Venus drops below them. Jupiter emerges from conjunction in the dawn and passes just a quarter degree from Venus on the 18th. Then the king of the planets will be above the goddess. If you have a clear enough horizon, look at the two planets maneuver through the Beehive Cluster in the days before and after that close call.

Mercury starts the month as a morning object. It’s not easy to see when it emerges in the evening sky later in the month. The best evening view of Mercury in late August will be close to the equator.

Constellations rising on August evenings include Cygnus, Aquila, and Capricornus. Those setting include Virgo and Boötes. Cetus and Pisces rise around midnight. Taurus, Orion, and Canis Major are morning risers. 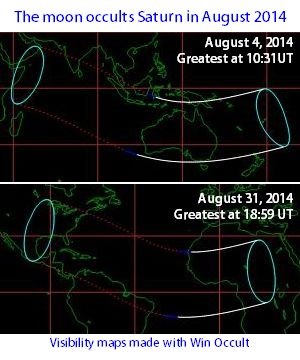 The moon occults Saturn on the 4th. The best places to see it are in Australia and the islands east of the continent. There’ll be another occultation on the 31st visible from parts of Africa.

The Perseid meteors could produce up to 60 meteors per hour around the 12th and 13th.

Neptune will be at opposition on the 29th.

An equinox will occur on Mars on the 17th. The sun is heading south in the Martian sky.