Neptune is at opposition this week, almost 29 earth-sun distances from us. It will be up all night in Aquarius. It’s going to be a challenge to find. Neptune’s not bright enough to be seen with the naked eye. It doesn’t happen to be very close to any very bright stars right now. So you’ll have to look for it among some of the dimmer guiding lights.

There’s a funny history to Neptune’s discovery. By accident, it wasn’t discovered sooner than it was. And by a combination of accident and coincidence, it was discovered when it was.

Galileo is believed to be the first person to see Neptune in 1612. He was watching Jupiter and following it from night to night. He made sketches on two nights Jupiter and Neptune were very close to each other. He thought the blue object next to Jupiter was a star, although his drawings and notes do indicate he thought it to have moved slightly.

Other astronomers had spotted Neptune, but when they saw it in a slightly different place the next night, they too failed to recognize they had indeed spotted a moving object. They thought they just made a mistake. Many moving objects including asteroids and comets have been seen, even photographed, long before anyone realized what they were. Neptune is perhaps the first. Some scientists like making orbital calculations, determining where objects would have been in the sky long ago, and looking for “pre-discovery observations” stored in university and observatory archives.

In 1846, Johanne Galle used a mathematician’s prediction of where to find the “Planet X” and set his telescope on that part of the sky. Galle found the faint blue dot we now call Neptune. However, over the next century or so, astronomers learned more about Neptune and concluded it couldn’t be Planet X. Neptune isn’t big enough and it wasn’t ever close enough to tug on Uranus the way astronomers had thought it did.

Today’s astronomers say Uranus never was tugged by any Planet X and the astronomers who thought it had been actually based their expectations on mistakes made in notes about Uranus’s position. So we’ve gone from astronomers thinking they made mistakes and dismissing the moving planet right in front of their eyes to astronomers actually making mistakes and finding a new planet anyway!

Neptune’s moon Triton was found less than three weeks after the planet itself was confirmed. It took more than a century before the second moon, Nereid, was found. Since then, 17 more moons have been discovered.

Neptune has a rocky core and an atmosphere made of methane, helium, and hydrogen. The planet’s diameter is about four times that of Earth’s. There are some thin partial rings made of rocks orbiting the planet.

You can see Neptune if you look carefully in Aquarius. You don’t have to look on the night it’s at opposition, although that will be the absolute closest look you’ll get until August 29 next year. But this week, Neptune rises at sunset, crosses the meridian at about local midnight, and sets at sunrise. 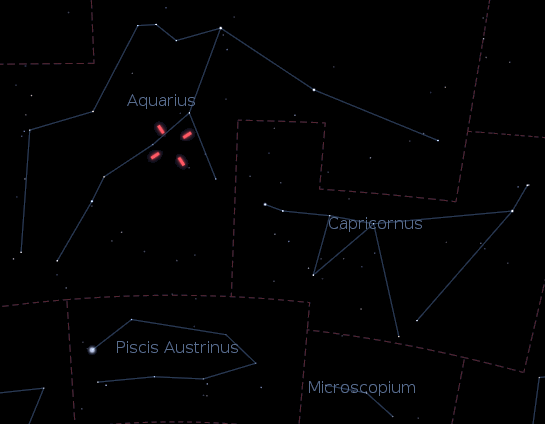 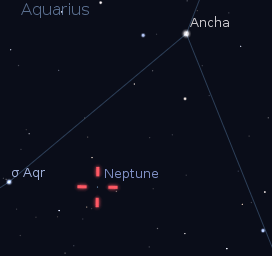