Jupiter and Venus have been close together since their very close conjunction at the end of June. They’re heading into the sunset as August starts. They’re somewhat hard to see already from northern middle and high latitudes, but those near and south of the equator can see them easily. As Jupiter moves toward Regulus, Venus moves away from it. But Mercury is moving toward Regulus, too. Mercury, Jupiter, and Regulus will be within a degree of each other on the 7th. That will provide the first of two good opportunities to see Mercury this month.

The second chance to see the messenger planet is on the 16th. A two day old crescent moon passes it.

Venus and Mercury both go through aphelion this month. Venus does so on the 8th and Mercury on the 29th.

Around the middle of the month, Venus will pass between Earth and the sun. Then it will reemerge before sunrise by the end of the month. Jupiter will go through conjunction on the other side of the sun this month, but it won’t emerge quite as much by month’s end.

Saturn stays between Libra and Scorpio. Northern hemisphere watchers will see them looking rather low in the southwest at sunset. 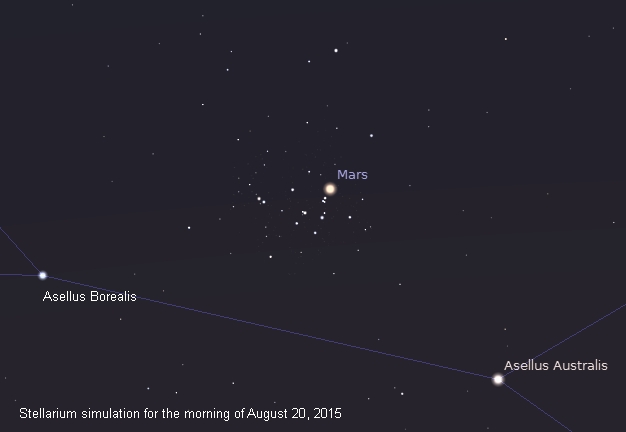 Mars is in the morning sky starting the month near Gemini. It’s heading toward Cancer and passes right through the Beehive cluster on the 22nd. Youll spot Venus south of Mars at the end of August.

August mornings are a good time to get reaquainted with Orion. It’s already rising before sunrise.

The moon is just past full at the start of August, it’s at last quarter on the 7th, is new on the 14th, at first quarter on the 22nd, and full again on the 29th. This month’s full moon is being described by some as the first of three so-called supermoons of the year. It will occur just 23 hours before perigee. Next month’s will be closer, happening just one hour after perigee.

The moon occults Aldebaran on the 8th for viewers in central and western Asia. 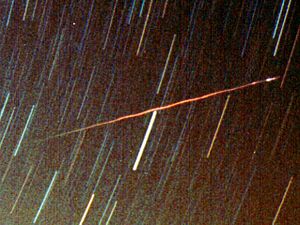 The Perseid meteors are expected to peak on the 13th from 06:30 to 09:00 UT. Best viewing will be from North America. The moon is new, so those with dark skies could see up to 100 meteors per hour if the show turns out to be a good one this year. The meteors are from Comet Swift-Tuttle. One meteor shower predicter, Jérémie Vauballion of France, expects viewers in Asia to get a good show 12 hours before North American viewers because of a comet trail from 1862 coming close to Earth at that time.