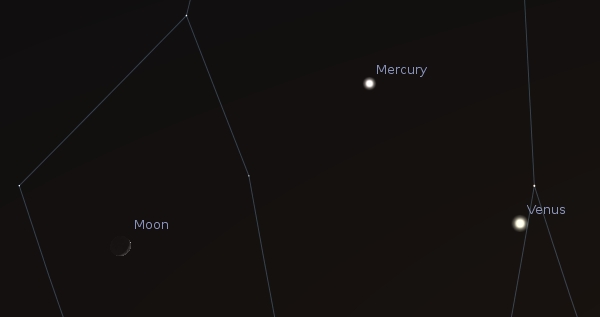 June begins in the middle of that three-planet meet-up that started coming together in the last ten days of May. Mercury, Venus, and Jupiter are in the evening sky in the west just after sunset. Procyon is to the left of them. Capella is to the right. On the meridian around sunset is Arcturus. Vega is half-way up the sky in the east.

By the 10th, Jupiter has dropped below the other two planets into the sunset. It’s heading toward conjunction with the sun on the 19th. The moon is left of Mercury and Venus. Mercury is slowing down its climb into the evening sky and reversing as Venus catches up to it. Just a few nights later, Mercury has clearly dropped below Venus.

Mercury is at greatest elongation from the sun on the 12th. It’s 24.3° east of the sun. The very next day, Venus is at perihelion. Its distance from the sun will be 0.718 astronomical units. The asteroid Vesta will pass 2.2° from Mercury on the 17th.

The moon passes in front of the star Spica on the 18th.

The moon passes by Saturn on the 19th.

A few nights later, on the 23rd, the closest and brightest full moon of the year happens. The moon is at perigee just minutes before. The center of the moon will be 356,900 km from the center of the earth.

By month’s end, Altair is easy to spot in the east after sunset.

Mars is a morning object this month. It becomes easier to see toward the end of the month. It’ll be in the east a little before sunrise. Spot it left of similarly colored Aldebaran.

Mercury reaches aphelion on the 29th. It will be 0.467 astronomical units from the sun.

The June solstice is at 05:04UT on the 21st. The sun will be at its northernmost point in the sky at that time. The very next day at 16:12, the moon will be at its furthest south this month.

You may be interested in a difficult to see meteor shower on the 15th and 16th. The June Lyrids originate from Lyra. It has been known to produce only about ten meteors per hour at best. Discovered in 1966, it isn’t well studied. The best view will be after midnight when the moon will be set but Lyra will be up the rest of the night.