April 2013 starts with the moon almost at last quarter phase at its furthest south in the sky.

Mercury is at aphelion (farthest from the sun in its orbit) on the 2nd 0.467 astronomical units (Earth-Sun distances) from the sun. The asteroid Melpomene is at perihelion (closest in its orbit to the sun) at 1.795 AU

on the 5th. It’s too close to the sun in our line of sight to see, however.

Mercury emerges from the sun’s glare in the morning skies late in the month.

Mars passes 0.6° north of Venus on the 7th. However, we’ll all have to settle for knowing about this close pairing and not seeing it. The two planets are in the sun’s glare. Mars is heading for conjunction with the sun on the 18th. Venus is not in conjunction this month, but it stays in the sun’s glare too.

On the 14th, the moon is 3.4° north of Aldebaran. A little less than six hours later, Jupiter will be 2.1° north of the moon. Jupiter is an evening object all month, setting around midnight.

Northern lunistice is on the 15th.

If you see any meteors this month, try to figure out if they come from the constellation Lyra. The April Lyrid shower peaks around the 21st. 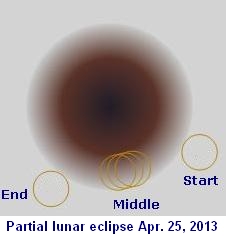 Asia, Australia, and Africa will get a partial lunar eclipse on April 25th. For 24 minutes, a tiny piece of the moon’s northern limb will be in the earth’s shadow.

The moon will occult Spica on April 24-25. The middle of the event is on the 25th at 0:09 UT. The visibility zone for this event will be South Africa, northeastern South America, and a stretch of the Atlantic Ocean between the two from the West Indies to the Walvis Ridge. On the 26th, Saturn is 3.5° north of the moon. Then the moon is at perigee (closest to Earth) on the 27th. And on the 28th, when the moon is at southern lunistice again, it will be 6.7° north of Antares.

Saturn is at its closest to us on the 28th, 8.8 astronomical units from us. It’s at opposition, which means it’s up all night. The planet’s north pole is tilted toward us by about 18°. So we’ll get a fairly good view of the rings.

Comet C/2011 L4 (PANSTARRS) was at its closest to Earth on March 5 and its closest to the sun on March 10. So it’s expected to get dimmer in April, although it will be moving into farther into the night sky after 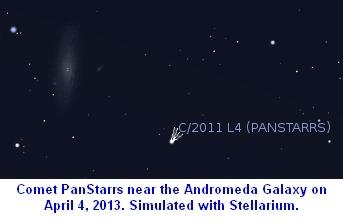 sunset. Northern hemisphere observers should look for it about 4° below the Andromeda Galaxy (M31) in the northwest after sunset April 1st. The comet moves up and to the right from night to night. Its closest to M31 is on the 4th just 2.5° away. The comet keeps going northward and approaches Cassiopeia by the middle of the month. On the 20th, it’s directly in between Shedir and Caph, the two stars forming the easternmost arm of the W of the celestial queen’s constellation. By the end of the month, the comet is between Cassiopeia and Cepheus. It probably will require a telescope or binoculars to view by this time, but one never knows what comets will do when it comes to brightening and dimming. Astronomers think Comet C/2011 L4 (PANSTARRS) is on its first trip close to the sun, coming to us from the Oort Cloud. They’re still studying its orbit, but they think it may not return for another 100,000 or more years.