Some people in the northern hemisphere have trouble believing it, but when summer’s starting to get hot Earth is farthest from the sun. The earth’s distance from the sun is a little different every day because Earth doesn’t go around the sun in a perfect circle (although it comes close).

The path a planet makes around its parent star is an ellipse. You might call it an oval, but professional mathematicians say only some ovals are ellipses. They like to be as accurate as they can. I think that’s good practice, so ellipse it is. 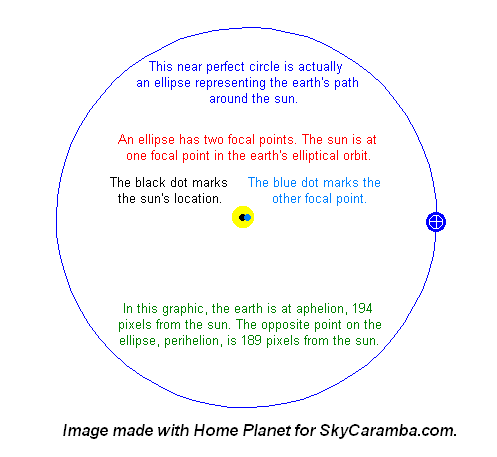 An easy way to draw an ellipse is to stick two pins through a piece of paper and put a string that doesn’t stretch around them. Use a pencil to pull the string into a taut triangle. Then, keeping the string taught, go around the two pins with the pencil as though you’re drawing a circle with a compass. Your writing utensil will follow the path of an ellipse with the pins marking the two focal points.

Some people have trouble believing that in early July the earth can be farthest from the sun. Everybody knows that, at least in the northern hemisphere, it’s getting hot in July. Since the sun is hot, it seems reasonable that the sun should be closer. They’re forgetting it’s winter at the same time in the southern hemisphere.

Sure, the sun’s distance affects how much of its energy reaches Earth and heats it up—overall. A bigger influence on the weather is how directly the solar energy reaches different parts of the planet. During a northern summer, the northern hemisphere is tilted toward the sun. The more directly the sun’s light can shine on a surface the warmer that surface becomes.

It’s a good thing Earth’s orbit is almost a perfect circle. Otherwise, the earth-sun distance would make a big difference. I think the seasonal temperature differences are enough.