Jupiter is an evening object. It will move eastward in the sky close to the Hyades all month. This month’s first quarter moon comes especially close on the 17th. It will pass between Jupiter and Aldebaran.

Saturn rises in mid-evening. A waning gibbous moon is near Spica on the morning of the 1st and near the ringed planet in the evening. Saturn is moving very slowly westward just west of Libra. 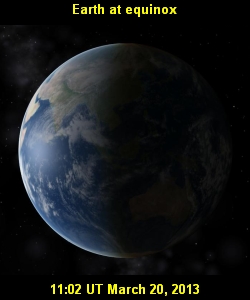 For some viewers, the moon won’t just be near Spica on the 1st. It will cover the star. This occultation will be visible from most of South America, the Central American Pacific coast, and parts of the Pacific Ocean from the Albatross Plateau to the Chile Trench.

The moon will hide Spica again on the 28th. Viewers in southeast China to Malaysia to the Philippines, to the far northern reaches of Australia will be able to see it. So will many inhabitants of islands in the South Pacific.

Mercury appears in the morning sky after emerging from inferior conjunction on the 4th. Mercury will be 4.8° north of Venus on the 7th. It’ll be too close to the sun to see safely, but try finding it 2° south of a waning crescent moon on the 10th. Venus will be 5.9° south of the moon a little later the same day.

Venus is a morning object most of the month but is disappearing into the solar glare. The planet heads into conjunction with the sun on the 25th. Meanwhile, Mars is an evening object also heading toward the sun. But the red planet won’t reach solar conjunction this month. Venus, moving much faster, will join Mars in a pairing in April.

One year and one day after its discovery, Comet C/2012 F6 Lemmon will reach perihelion on the 24th. It will be 0.731 astronomical units (Earth-Sun distances) from the sun. However, it will be too close to the sun as seen from Earth to safely view the comet. The best chances are in the weeks before and after.

It’s hard to predict how bright a comet will be, so pay attention to news sources that report on comets. Some astronomers believe it will be easy to spot with binoculars or even the naked eye. In March, Comet Lemmon is a southern hemisphere object. It will be visible to northerners in April and May. It will likely be dimming then, on its way from the inner parts of the solar system not to return this way for more than 11,000 years.