The moon’s almost full the last night of May and first night in June. Spica is one degree north of the moon and Saturn’s just five degrees further north. If you had any doubt which was which, that’s a good night to see for sure. The moon will pass by them again on the 27th.

On the 4th, you’ll see what should be one of the brightest full moons of the year because it’s one of the closest. But it’ll be one of the darkest full moons too because of a partial lunar eclipse. The eclipse begins as the moon sets in the Americas and ends as the moon rises in the eastern Indian Ocean, Malaysia, and the eastern Asian coast. Everywhere in between gets to see the entire eclipse. The southern tip of the moon will darken as it moves through the darkest part of the earth’s shadow. This will also be the most southerly full moon of the year at 22 degrees south of the celestial equator.

Things will be exciting for sun watchers on the 5th and 6th. A little black dot will cross the northern part of the sun’s disk. The dot will still be there at sunset for people in North America. For most of Asia and Australia, it’ll

still be there when the sun rises. The entire event will be visible from many Pacific islands and ships. The little black dot will be the planet Venus. It won’t be so perfectly placed in between the earth and the Sun again until 2117.

Mars heads southeastward away from Leo and toward Virgo this month. You’ll see the red planet and those two constellations in the evening to the west. The moon passes Mars on the 25th.

Aquila is rising in the evenings this month. That’s a heavenly eagle owned by the Roman god Jupiter.

You’ll have to be in the southern hemisphere to get a decent view of this, but Jupiter is rising before the sun this month and a few weeks after Venus transits the sun, it will rise in the morning earlier and earlier as though to meet Jupiter. The moon joins them on the 17th. At the end of June, the two planets will be about five degrees from each other. 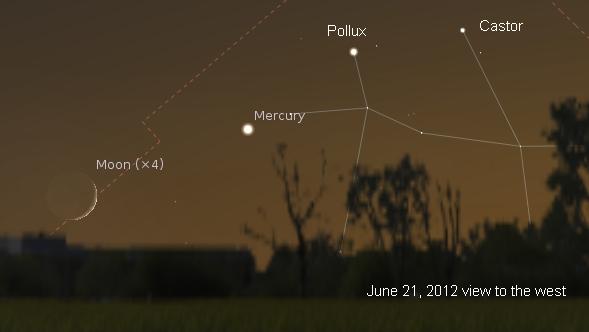 Where’s Mercury? Mercury and Venus will pass each other on the 1st. But they’re so close to the sun, you won’t see it. If you can spot a thin crescent moon in the west after sunset on the 21st, look for Mercury to the right of it. Keep looking for Mercury until the end of the month when the viewing will be about as good as it gets. Its greatest elongation 25 degrees east of the sun will be on July 1st.

With all these things happening in June, there should be plenty for you to enjoy. ¡SkyCaramba!

The images on this page were simulated with Stellarium. Look it up at www.stellarium.org.

http://eclipse.gsfc.nasa.gov/OH/OHfigures/OH2012-Fig03.pdf to read NASA’s info on the eclipse.

http://eclipse.gsfc.nasa.gov/transit/venus0412.html to read NASA’s information about transits of Venus.