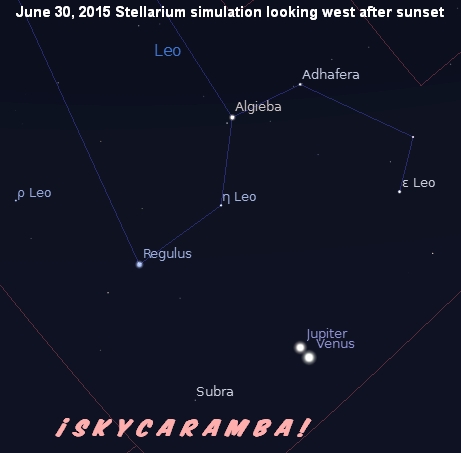 June 2015 is an awesome month for observing Venus. It starts out the month just left of Kappa Geminorum after sunset in the west. It proceeds eastward a little more each night, achieving greatest elongation 45° east of the sun on the 6th. When it passes through the heart of Cancer on the 14th, check out the view next to the Beehive Cluster (also called Praesepe)! A little higher up than Venus is Jupiter. It’s also moving eastward although much more slowly in the space between Cancer and Leo. Venus is closing in on Jupiter already as the moon passes south of them on the 20th. On the very last evening in June and the first day of July, Venus is only 0.3° south of Jupiter. It will be fantastic to see them both in a telescope. Venus will keep going toward Regulus in Leo into July.

Saturn is in the southern part of the sky (for northern hemisphere viewers) at sunset with a nearly full moon west of it in Libra. The ringed planet is moving slowly westward between Scorpio and Libra. The moon passes Saturn again on the 29th. 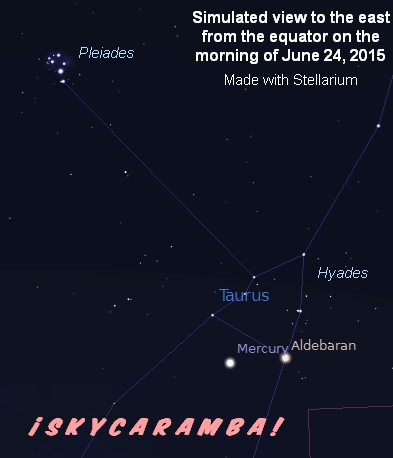 Mercury is at aphelion on the 2nd 0.47 astronomical units from the sun. It’s morning object this month. Those who live at low latitudes will get the best view of the messenger planet, especially in the second half of the month. A thin crescent moon will pass the planet on the 14th to help with identification. Mercury is among the stars of the Hyades from the 20th to the 22nd. It’ll be out of the V but left of Aldebaran as you look east not long before sunrise. The best chance to see Mercury is on the 24th when it’s at greatest elongation 22° west of the sun.

Mars stays too close to the sun for us to see it this month. It goes through conjunction on the 14th. The red planet goes through its northward equinox on the 18th. That’s the equivalent of the March equinox on Earth which happens to have its northern solstice just three days later.

The moon passes in front of Uranus on the 11th. Southern and eastern Australia and the ocean south of the continent get the view.

Below is an image showing the path of Venus through Cancer in June 2015. Click the image to enlarge it.