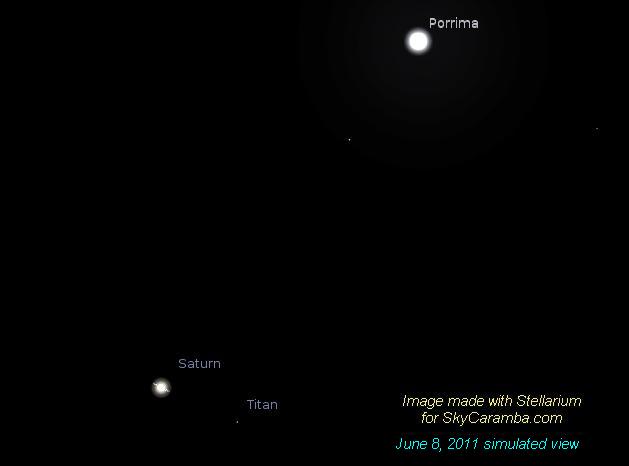 Saturn’s approaching one of the few stars in the sky whose name didn’t go through the Arabic language before it had a name in English. Porrima is called the prophecy star (think of the words portend and portentious). I’m sure someone is busy trying to figure out what a close call involving Saturn and Porrima means for our future, but I don’t bother with things like that.

When Virgo is drawn, Porrima is often shown as an elbow on the arm holding a spike of wheat. The spike is the bright star Spica. If you draw a line from Spica to Porrima and keep going, you’ll get to Denebola in the tail of Leo the Lion.

As Saturn pulls close to Porrima, those of you with telescopes will naturally want to see them both in the same view. If you’re lucky you may see one or two of Saturn’s moons as well. And if you’re really lucky, you’ll be able to see both stars of Porrima in the same view as Saturn.

I say really lucky because that view will be a challenge. The two Porrima stars orbit each other every 169 years and they’re still pretty close after their last close call in 2005. Many smaller telescopes can’t separate them at all now. If your telescope can separate them, you still have the challenge of getting Saturn in the same view. If you can get half the full moon in a view at that magnification, you have a good shot at it.

I can’t afford a bigger telescope right now, so for me time is the answer. I’m told that if I wait ten to twenty years with the equipment I have now, I’ll be able to see the two stars distinctly. It’s interesting to me that backyard astronomers of just a half century ago waited in anticipation of Porrima A and Porrima B being as close as they are now.

I’ll settle for the view of Saturn and a singular appearing Porrima and probably a couple dim stars near it. Don’t confuse those eighth and ninth magnitude objects for either of the Porrima pair. On a good night at my location, I can also see Saturn’s moon Titan which is about ninth magnitude.

For most of us, Porrima is nicely placed for viewing in May and June. It’s close to the meridian (a line overhead from north to south) as darkness sets in. That makes it an easy target for the evening observers that most of us are. Take a look around so you can continue to find Porrima after Saturn leaves.

Here’s a movie of the Porrima orbit