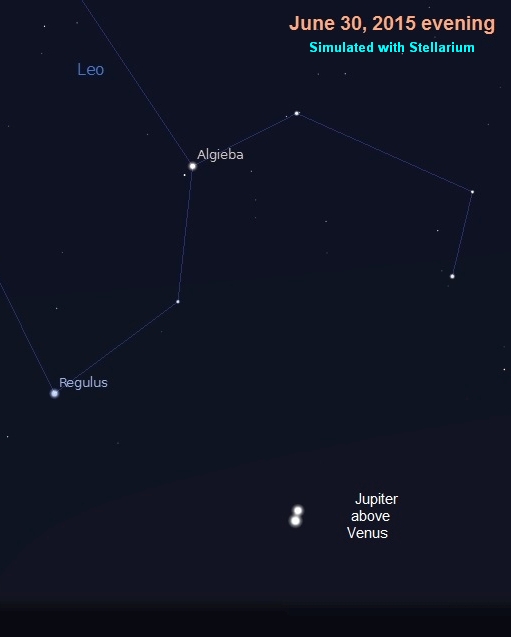 July starts with a very close conjunction of Venus and Jupiter. The two planets are just 0.3° apart below Leo in the west after sunset. For those at middle northern latitudes, the planets will maintain the same distance above the horizon from night to night while drifting apart. Venus will be moving to the left. The moon passes close to Venus on the 19th. That’s about the time Venus finally starts dropping below Jupiter’s level.

Saturn is nearly on the meridian at sunset when July starts. From most of the northern hemisphere, the ringed planet will be in the south. It’s just about overhead close to the equator. At about 17° south, it is overhead. And it’s a bit to the north from points further south. Saturn moves closer to the west each night. It isn’t moving much next to Libra. The moon is in the neighborhood on the 26th.

Aquila, Vulpecula, Delphinus, and Equuleus are among the constellations that are rising as darkness sets in.

Mercury is a morning object close to Aldebaran at the start of July. It’s getting hard to see in the sun’s glare by mid month. It will be close to Mars around the 17th and then drop below the red planet which will become a little easier to see before sunrise by the end of July. The best views of both will be near the equator. Use binoculars to help. Mercury is moving fast. It’s at superior conjunction on the 23rd.

The moon is full on the 2nd, at last quarter on the 8th, new on the 16th, at first quarter on the 24th, and full again on the 31st. Some people have taken to calling the second full moon in a month a blue moon. This is because of an error Sky & Telescope magazine made in the 1940s when trying to determine why an almanac published a few decades prior referred to some moons by the name. After it became a popular question in trivia games in the 1980s, the magazine writers sought to determine the fact’s source. They were surprised to learn it was their own magazine.

Earth is at aphelion (closest to the sun) on the 6th. Mercury is at perihelion on the 16th.

The moon will occult Uranus on the 9th. Viewing will be from ocean areas south of Africa.

Try to look for Delta Aquarid meteors on the 28th and 29th after midnight. The nearly full moon will keep you from seeing some of them. 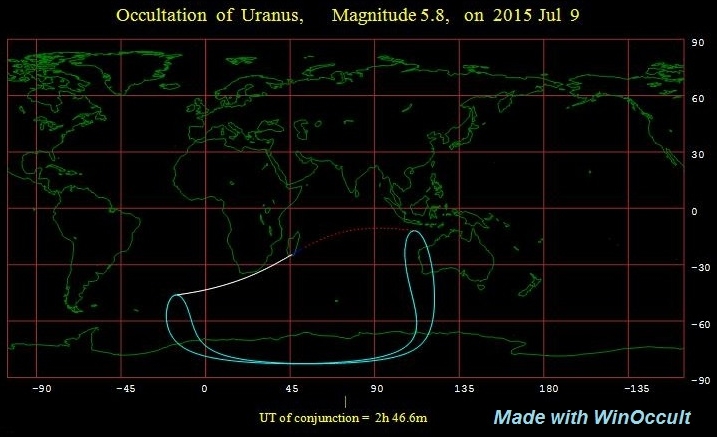