Look for Mars very low on the western horizon after sunset in early February. Almost a week into the month, you’ll notice a brighter object approaching it from below. That’s Mercury. The messenger will be 0.3° north of 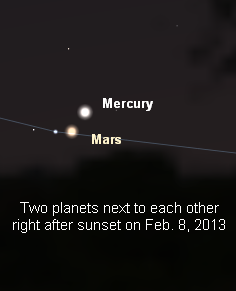 the red planet on the 8th. Mercury will then be above Mars, a little higher above it each night until the 16th. On that day, Mercury will be at greatest elongation 18.1° east of the sun. In northern latitudes where the sun is setting later each day, these two planets will be getting harder to see before they set. The two planets will be close together again on the 26th, 4.2° from each other and just 10° from the sun and much harder to see.

If you want more of a challenge, you can try to find Neptune 0.4° north of Mars on the 4th and the same distance north of Mercury on the 6th. Neptune is very dim, its light will be going through very much atmosphere before it gets to you, and it will set almost as soon as it’s dark enough to see. If you see it at all, you will see it briefly.

Mercury will be at perihelion on the 17th. It will be slightly less than one third of an Earth-Sun distance from the sun.

Venus is at aphelion on the 21st. It will be 0.7 astronomical units from the sun. 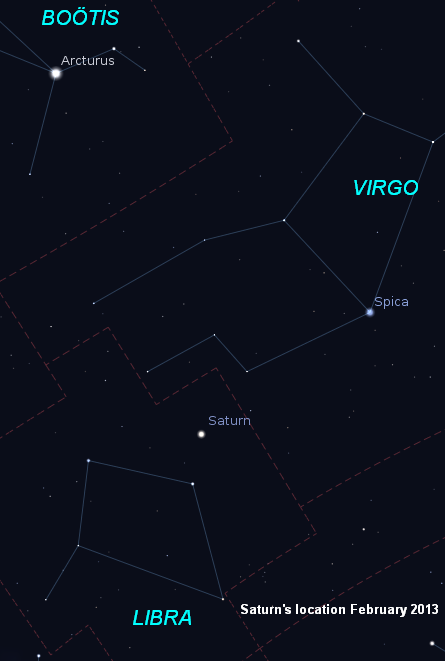 The southern solstice on Mars will be on the 26th.

The moon occults Spica on the 2nd. This will be visible from southern Africa and the Angola Basin. The moon is passing in front of the star approximately every 27 days for the next several months. The same parts of Africa and the Atlantic Ocean will get repeat performances in April and June.

A very thin crescent moon will approach Venus in the morning sky on the 9th. The best viewing for Venus this month is from the southern hemisphere.

A day after first quarter phase, the moon will occult Jupiter on the 18th. This won’t be highly visible. You will have to be in some extreme southern parts of Australia or the ocean area between the Australian coast and Antarctica.

The moon is near Saturn on the 2nd and 3rd. Saturn will spend the month at a near standstill between Libra and Virgo.