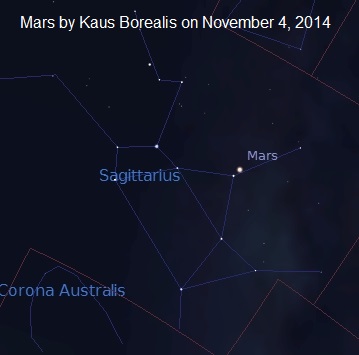 This week, Mars enters Sagittarius. The constellation is “the archer”. It is usually depicted as a centaur—a half man and half horse creature—aiming a bow and arrow. That’s a colorful image appropriate for cultures of long ago that told stories about strange beasts. In modern times, people who look at the stars of Sagittarius liken their arrangement to a household item. They outline a teapot.

Look for the teapot and the red planet when evening darkness starts. The constellation is at about 30° south and it’s on the line the sun travels. So for most northern hemisphere viewers, it’ll be in the southwest. From the southern hemisphere, it will be in the west. Now through about the middle of November, as Sagittarius sets a little later each night, Mars travels through its northern edge. 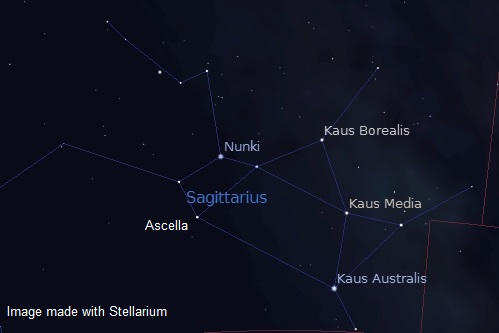 On November 4, the red planet appears very close to Kaus Borealis. The star, 78 light years from us, is orange and might look like Mars if it were much brighter. The star’s name comes from two languages. Kaus is Arabic for bow. Borealis is Latin for northern. The name is meant to tell us this star is in the northern part of the bow. Elsewhere in Sagittarius, you’ll find Kaus Media and Kaus Australis. Respectively, they are the middle and southern bow stars.

Take a look at the stars in the teapot’s handle on the west side of the constellation. They are known as the Milk Dipper, because they look like they’re scooping up a sample of the Milky Way. A rich treasure of stars and galaxies awaits your eyes if you can look here in a telescope or binoculars.

On November 13th, Mars is in the teapot’s spout and north of a star named Nunki. It’s a blue star 228 light years away and is in the arrow vane. The name Nunki seems to trace back to the Babylonians. According to some sources, the Babylonians saw a lot of water related constellations in that section of sky. And so Nunki is said to mean “Star of the Proclamation of the Sea”.