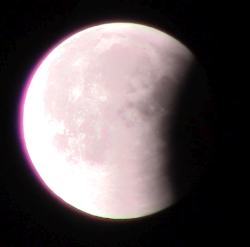 April starts with a nearly full moon at apogee. It is totally eclipsed on the 4th. The entire event is visible from most of the Pacific Ocean, the far eastern parts of Asia, and eastern Australia. The next night, the moon is close to Spica. On the 8th, the moon passes Saturn. On the 19th, the day after a new moon, the moon is close to Mercury and Mars. Two nights after that, it occults Aldebaran which Venus is passing near. The occultation is the fourth of 49 in a row and is visible from eastern Russia. The moon passes Regulus on the 28th.

Mercury starts the month as a morning object and then goes through superior conjunction on the 10th. It’s at perihelion on the 19th as it draws near Mars with the moon passing by. It’s actually closest to Mars on the 23rd. Mercury will remain an evening object until almost the end of May, so you should have plenty of opportunities to see it.

Venus shows why it has a reputation for being the evening star by continuing its evening showing. It has been an evening object since October last year and will remain one until August this year.

Jupiter is high in the sky at sunset this month. It’s a little east of Asellus Australis in Cancer.

Saturn is retrograde all month passing a little north of Acrab in the claws of Scorpio.

Uranus is close to Mercury on the morning of the 8th. However, dawn’s light will make this conjunction nearly impossible for anyone to see. 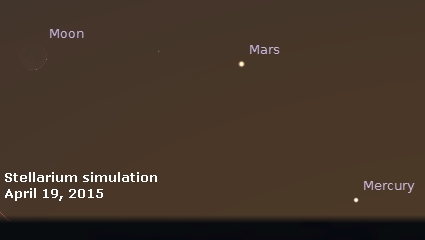 Comet 88P/Howell is at perihelion on the 6th. This object discovered by Ellen Howell in 1981 is visible this month from the southern hemisphere in the morning. It’s not expected to be brighter than 9th magnitude, so a dark sky and a telescope are required. It currently orbits the sun in 5.5 years.

The April Lyrids meteor shower peaks around the 22nd and 23rd. The moon doesn’t interfere with this shower this year, because it sets during the evening and the shower is a morning event. The peak is usually sharp. It lasts a few hours. However, you may see a few Lyrids a few mornings before or after those dates.

For some down to Earth astronomy events, consider participating in International Dark Sky Week from April 13 to 18. During this time, many astronomers try to call attention to the problem of light pollution. They ask people and businesses to turn off unnecessary outdoor lighting. Of course, some outdoor lighting is necessary for modern lifestyles. So astronomers also promote the use of shielded lights that direct light to the places that need to be lit up instead of letting it go upward to ruin the view of the sky.

And perhaps there are some Astronomy Day events in your area on April 25.