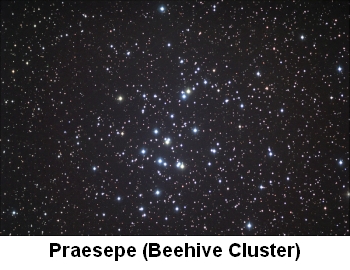 Look for Mars in the morning this week and next. On the morning of August 23, it’s just below the Beehive Cluster. As the Beehive rises a little earlier each morning, the red planet drops below it. The Beehive is a cluster of stars in Cancer.

The cluster’s Latin name is Praesepe which means manger. The stars just north and south of Praesepe are known as the northern and southern donkeys or Asellus Borealis and Asellus Australis, respectively. To the naked eye, Praesepe looks like a blurry patch of light. So in naked eye star lore, it might as well be a manger that animals eat from.

But in binoculars or a telescope, you can see dozens or hundreds of stars. The bigger the telescope and the darker your sky, the more stars you’ll see. It reminds many observers of a bunch of busy bees. Praesepe’s stars are about 577 light years away.

As the week goes by, you’ll see Venus rising sooner each day a little below Mars. Mars will be north of a star named Acubens while Venus is south of it. The two planets appear closest together on the 29th. That’s the date of this month’s full moon. So as the moon is setting on one side of the sky, Venus and Mars will be rising on the opposite side. 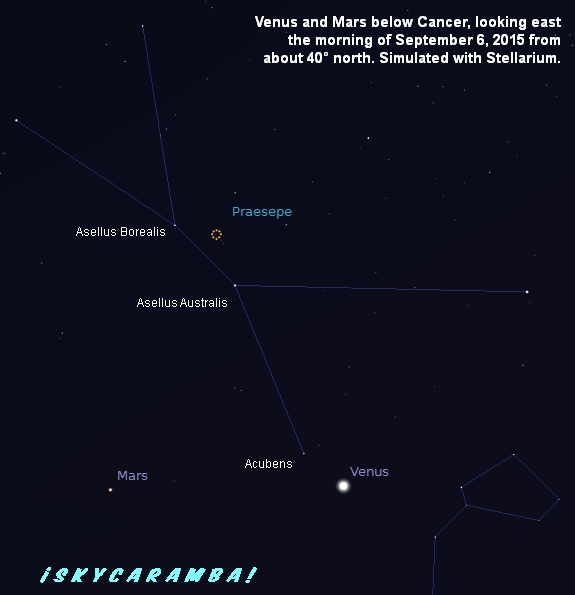 The name Acubens comes from Arabic and recognizes the star’s place in the crab constellation. It refers to “the claws”. It’s about 174 light years away. It is actually a binary star. The one visible with the naked eye is magnitude 4.25. The dimmer one is magnitude 11. Spectrographic studies indicate there may be a third star in the system orbiting very close to the visible one.

In September, Mars will keep going below Acubens and toward the constellation Leo while Venus appears to linger near the star. The waning crescent moon will join them on the 9th. Watch Mars pass by Regulus on the 25th. Venus will have clearly started moving toward Leo by that time. You’ll also see Jupiter below them all.

Jupiter and Mars will be close together on October 18. By then, we’ll be talking about the Venus, Mars, and Jupiter Morning Show. The moon will join them as a guest in November.