Venus is heading into the sunset as January starts. It will be at inferior conjunction on the 11th. You can see Venus again later in the month in the morning. The moon will pass by it on the 28th. Look at Venus in a 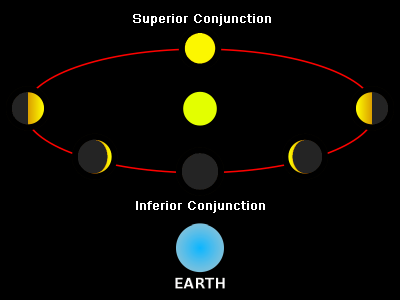 telescope before or after conjunction and you will see it lit up as a crescent. The crescent thickens noticeably in the last week of January. We sometimes see Venus as a crescent for the same reason we sometimes see the moon that way. It’s a round object with its unlit side turned toward us. Venus will be at perihelion on the 24th.

The bright stars Altair and Vega are setting as evening sets in at the beginning of the month. Meanwhile, the bright stars of Orion, Gemini, Taurus, and Auriga are rising. You will find Jupiter in Gemini. It’s in retrograde motion, moving westward in the constellation this month. It’s conveniently up all night this month, going through opposition on the 5th. The moon passes the big planet on the 15th.

Later in the evening, Canis Major and Leo have risen. Wait a while after midnight to see Mars rising in Virgo west of Spica and south of Arcturus. Mars moves closer to Spica by the end of January and gets a visit from the moon on the 23rd.

Saturn rises closer to dawn in the middle of the diamond of Libra. The moon will pass close to the ringed planet on the 25th. For people in some places, the moon will pass in front of Saturn. You’ll need to be on a southwest Pacific island such as those of Tonga, South Samoa, or Kiribati. By that time, Saturn has moved eastward in the big diamond.

A good chance to see Mercury comes on the 31st. The messenger planet is at greatest elongation in the evening sky at the end of January. A thin crescent moon is next to it to the north that evening. Unlike the view

of Venus, the telescope reveals a nearly full Mercury.

Earth is at perihelion on the 4th. It’s about 98% of its average distance from the sun.

Look for the Quadrantids meteor shower on the 3rd and 4th. These meteors appear to radiate from a place far north in the sky, so it’s primarily a northern hemisphere shower.

Two asteroids in the belt between Jupiter and Mars will be in conjunction on the 30th. Eunomia will be 0.4° north of Eros. You’ll find them with a telescope in the southeast that morning, a little to the right of Antares and below Saturn.