A volcano erupted in New Zealand on November 19, just in time for a penumbral lunar eclipse on November 28. The events aren’t related. But the former can have an effect on the latter.

If you could be on the side of the moon that faces the earth during the eclipse, you’d see a partial eclipse of the sun. Earth would be partially in front of the sun. For the same reasons sunrises and sunsets appear red to us on earth, the earth would appear to have a reddish halo or part of a halo with the sun behind it.

The deeper the earth goes into the earth’s shadow, the more of that reddish light hits the moon’s surface during the eclipse. And the more of it that reflects back to those watching from earth. In other words, the redder the moon looks. And the eclipse on the 28th is considered one of the deeper penumbral eclipses.

The reddish color happens normally. It’s just because light on the blue end of the spectrum is scattered in a different way than light on the red end as it goes through Earth’s atmosphere. A lot of clouds in our air during a particular penumbral eclipse can influence the color. Some penumbral eclipses have been yellowish and a few have been greenish. 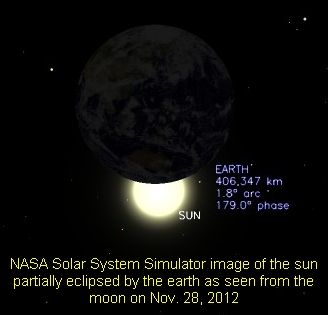 If there happens to be a lot of particles that block the blue light but let the red light pass through, the eclipse could be especially red. That’s what happens when a prolonged forest fire sends smoke particles high into the air. People all over a continent report a very red sun going up or down during those times. It also happens when there’s a volcanic eruption.

The eruption in New Zealand isn’t one of the biggest that has ever happened a week before an eclipse. But people watching the eclipse from New Zealand, other locations in the South Pacific, and Australia should be among the first to know if enough particles are in the air to affect the eclipse’s color. If you live elsewhere, you can surely find an online feed of the eclipse.

Hey, even if the New Zealand volcano doesn’t give much color to the eclipse, it’s fun to watch the moon darken up just a little and brighten up again over the course of a few hours. The entire eclipse happens from 12:15 to 16:51 UT. The greatest eclipse is at 14:33.