We could call July 2012 aphelion month. Three planets, including the one we live on, are at their farthest from the sun this month. Earth’s aphelion happens first. On the 5th, it will be about 94.5 million miles or 152.1 million

You can watch for Venus emerging into the morning skies before sunrise this month. Just a few weeks ago, it crossed right in front of the sun. Nobody on Earth will get to see that again for more than 100 years. So the naked eye view of the solar system’s second planet is the one you’ll have for a very long time.

Mercury is the closest planet to the sun and is notoriously hard to see because of that. You have to look while the twilight’s still gleaming or when dawn starts. Mercury’s greatest elongation (the point when it has the most separation from the sun) happens on the 1st. It will be 25.7° east of the sun, visible in the west after sunset. On the 12th, it will be at aphelion. The best time to see Mercury is when its greatest elongation happens the same day as its aphelion. But this month’s showing is almost as good as it gets.

Mars and Saturn remain evening objects this month. As they lower into the sunset from night to night, the red planet marches eastward on a heading that will take it south of the ringed planet. Mars will be well into Leo when the moon passes by on the 24th. But Mars won’t make it all the way to Saturn and the bright star Spica this month. Keep watching so you can enjoy that arrangement in August.

Jupiter is nicely placed between the Pleiades and the Hyades when July starts. Venus is right in the Hyades. 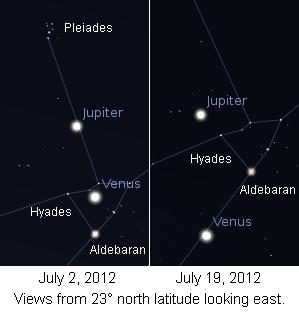 Venus moves faster and passes close to orange Aldebaran around the 9th. Jupiter takes a little longer to pass not quite so close to the dimmer but also orange Ain.

By the end of the month, you can easily see at least part of Orion rising before the sun. In the evening sky, say goodbye to Leo setting in the west as darkness sets in.

Around July 28 and 29, look for the Delta Aquarid meteor shower to peak. The best viewing will be after midnight. Look to the east.

Images were made with Stellarium. Here are some informative links.