October starts with Mars north of Antares and Saturn in the middle of Libra. For northern hemisphere observers, they will be in the southwest at sunset. Saturn moves east toward the edge of the diamond of Libra by the end of the month. But the planet becomes hard to see as it and the 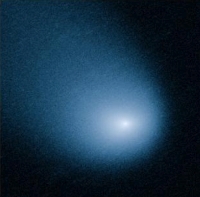 constellation set closer to sunset. By the end of October, Mars is into Sagittarius. The red planet will have a close call with Kaus Borealis, the bow star, in early November.

Pegasus, Andromeda, and Pisces are among the evening risers this month.

Jupiter is prominent during the morning. It’s between Cancer and Leo.

Mercury is close to the sun early in the month, but it emerges in the morning in Virgo by the end of October. The planet is at inferior conjunction on the 16th and perihelion on the 25th.

Venus is too close to the sun to see this month. It’s at superior conjunction on the 25th.

One of the most notable events this month is a total lunar eclipse on the 8th. The moon will spend 59 minutes in the central part of Earth’s shadow. Greatest eclipse is at 10:55 Universal Time. The event will be visible from the Americas, the Pacific, eastern Asia, and Australia. Look for Uranus a little south of the moon. It will be at opposition the night before. For just a few places in northeast Russia and the Arctic, the moon will pass in front of the blue planet during the eclipse.

A partial solar eclipse will occur on the 23rd. It will be visible from North America, far northeast Russia, and the far northern part of the Pacific Ocean. Be sure to use a solar filter or an indirect method of observing the sun to protect your eyes.

The Orionid meteors could put on a show around the 22nd and 23rd. These dust bits lighting up as they strike Earth’s atmosphere come from the tail of Halley’s Comet. Best viewing should be after midnight.

Look at Mars in a telescope if you can around the 19th. A comet called C/2013 A1 Siding Spring will pass very close to it. If people could be on Mars at this time, they might see meteor showers generated by comet dust striking the atmosphere. There is some risk that comet dust will affect spacecraft orbiting the red planet.

And a narrated video about what to expect during the eclipse: