¡SkyCaramba! Weekly astronomy blog for the week ending May 3, 2014

A very thin crescent moon is in the evening sky a little above orange Aldebaran on the first night of May 2014. Orange Betelgeuse is farther from the moon to the left. Above that is Jupiter about waist-high in the twins of Gemini. Leo is on the meridian at sunset. Mars is high in the east close to Porrima in Virgo. Saturn is rising in Libra. As the hours pass, Aquila rises around midnight. Venus is a morning object rising in the dawn. 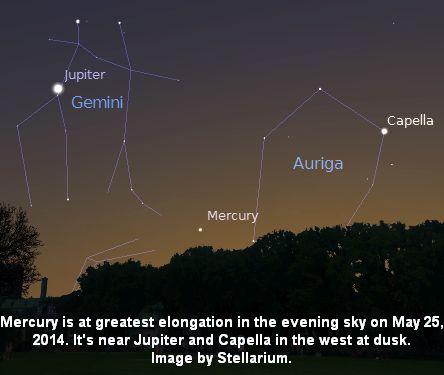 The moon’s as far north as it gets during its current orbit on the 2nd. Its crescent is much thicker when it passes Jupiter on the 4th. A waxing gibbous moon will pass Mars on the 11th. When it’s full on the 14th, the moon will occult Saturn. A wide path in the southern Pacific and across most of Australia are in the visibility area. The moon is new again on the 28th and a thin crescent reappears in the evening sky on the last evenings of the month.

Mercury is at perihelion, just 0.307 astronomical units (Earth-Sun distances) on the 2nd. But it’s venturing into our evening sky headed for greatest elongation on the 25th. It’ll be 22.7° east of the sun then.

Jupiter is moving eastward and passes just 0.5° from Wasat on the 22nd and 23rd. The big planet will be clearly east of both twins by the end of May, however, it won’t leave the constellation’s territory until July.

After Mars passes Porrima, it appears to slow down. It’s stationary around mid-month. On the 21st, it resumes direct (eastward) motion and will pass by Porrima again in June. 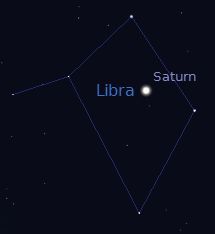 Saturn is right in the middle of the diamond of Libra this month. It won’t escape the diamond, but watch the ringed planet in May, June, and July as it moves westward and looks like it’s about to leave the diamond just before it turns around. This is a good month to see Saturn, because it’s at opposition on the 10th. It’s 8.9 astronomical units from us and will get farther away for about the next seven months and then get closer until next opposition. The planet’s northern pole is tipped toward us and we get a nice view of the northern side of the rings.

Venus remains easy to spot low in the dawn to the east all month. The goddess is at aphelion, farthest from the sun on the 16th. The planet’s distance from the sun is 0.728 astronomical units.

Meteor shower enthusiasts should watch for the Eta Aquarids around the 5th and 6th. There will be little interference from moonlight this year. You could see about one fast meteor per minute at the shower’s peak. These meteors are born of dust left behind by Halley’s Comet as they enter Earth’s atmosphere and heat up.

There may be another meteor shower to watch for around the 24th. Comet 209P/LINEAR passes closest to the sun on the 6th. Between 6:30 and 7:40 Universal Time on the 6th, Earth is expected to pass through a recent trail from this comet. That will make the shower a good one for North America and perhaps the Pacific. Nobody’s certain how many meteors will be seen per hour. You’ll just have to look for them yourself.