As November starts, the past full moon is approaching Jupiter for an occultation. On the 2nd, people in South Africa, far southern parts of the Atlantic Ocean, and on the ocean between Africa and Antarctica will see the moon pass in front of the planet. Most of those same areas and places west into southeastern Brazil will get 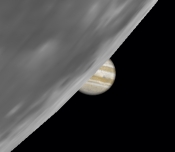 the repeat performance on the 29th. Each time, watch the moon approach the planet north of the Hyades V and the orange star Aldebaran.

Orion is approaching its winter prominence rising beneath the Hyades on November evenings. Look for Gemini to the left and Sirius to the right. Find these constellations and Jupiter rising as darkness sets in.

Watch for Venus much later, almost at sunrise. The moon passes it on the 11th. Then the moon is next to Saturn on the 12th. Watch these two planets in the morning sky this month. You’ll see that Venus is heading into the sunrise while Saturn is emerging from it. On the 26th and 27th, the two planets are just 0.5° apart. That’s just one full moon width!

The bright star Venus passes on the 18th is Spica. That’s the brightest star in Virgo. 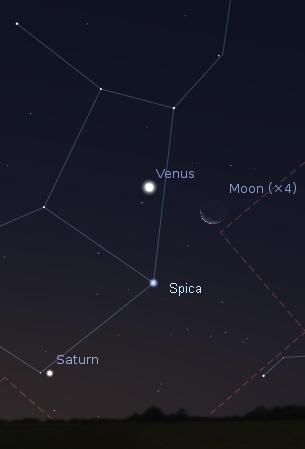 Late in November, some careful observers may be able to glimpse Mercury. Just as it looks like Venus is coming to meet the planet, Mercury retreats into the sunrise with Venus in hot pursuit.

Parts of Australia, Malaysia, and the southern Pacific Ocean will get a solar eclipse on the 13th. The path of totality crosses the Cape York Peninsula, goes north of New Zealand, and continues almost all the way to Chile. Totality will last up to four minutes. The moon is at perigee the next day and at southern lunistice the day after that.

Most of the moon will pass through the outer part of the earth’s shadow on the 28th. Australia, most of Asia, most of the Pacific Ocean, and Alaska are in the visibility area for this. You have to watch carefully to see a penumbral eclipse. The earth is not completely blocking sunlight from any part of the moon, so the moon will appear to darken just a little. If there happens to be a volcanic eruption sometime this month, the sunlight passing through the earth’s atmosphere on its way to the moon could bathe the lunar surface in an eerie red-orange hue.

The Leonid meteor shower peaks on November 17. This isn’t expected to be a peak year. However, a rather new moon will set early in the evening and leave skies dark for the best viewing later. You may see 10 to 15 meteors per hour.

Images above were simulated with Stellarium. Here are some links to informative sites.