Thousands of years ago, one of the planets wandering the sky earned a distinct reputation for the way it behaved. It was a lot faster than the others, it never got far from the sun, and it quickly moved from the evening sky to the morning sky and back again. To some observers, this planet was quick and sneaky like a thief. To others, it was dutifully quick like a messenger. Mercury became known as the messenger to the gods. 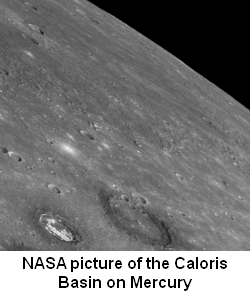 Mercury is less than 5,000 km wide, making it the smallest planet in the solar system. It’s smaller than some of Jupiter’s moons. It’s the closest planet to the sun and needs just 88 days to complete one orbit. It rotates once every 176 days. And Mercury’s gravity is 38% of Earth’s.

The planet is heavily cratered and of various shades of gray like Earth’s moon. There’s evidence of ancient lava flows on the planet. Much of the planet remains unmapped because only a few spacecraft have visited and they couldn’t make an image of the entire surface. Mercury’s most distinct feature is called the Caloris Basin. It’s where an asteroid is believed to have struck the planet perhaps billions of years ago. Other features on Mercury appear to have been caused by the planet shrinking and warping its surface over billions of years.

With virtually no atmosphere (just a few particles can be detected sometimes), the sunlit side of Mercury warms up to 450° Celcius. The dark side drops to -275°. The Messenger spacecraft scanned Mercury in 2012 and discovered water ice in some craters at one of the planet’s poles. The craters are so deep, sunlight never gets into them.

So if you missed Mercury earlier this month when it was close to Venus in the evening sky, you get another chance next month in the morning sky. It won’t appear near any other planets then. But the moon will pass by on the 17th and make it easy to spot.