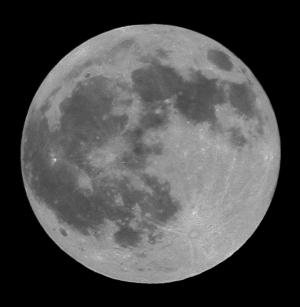 In 2015, the moon will be full on December 25. There are messages going around via social media talking about a Christmas full moon being a rare thing, so everyone should take note and enjoy. Just how rare is a full moon on Christmas? Of course, to properly answer the question, we have to do some research. And we have to establish a few definitions.

Let’s cover a 200-year period from 1851 to 2050. That should give us plenty of years for a fair statistic. Astronomers say the moon is full when it’s most opposite the sun. We can calculate that down to the minute. Now we need to decide which time zone to use for our purpose.

The December 25 full moon in 2015 happens at 11:11 Universal Time. That’s almost the middle of the day in the centrally located Universal time zone. Nearly the entire world will consider it to be December 25 at that moment. On Midway Island in the Pacific Ocean, Christmas Day will have just begun. It’ll be 12:11AM. A quarter of the world eastward from there, the sun will be rising on Christmas morning in the Americas. Another quarter of the world eastward, and it’s midday in Africa and Europe. Keep going east and that full moon is happening at 11:11PM on Wake Island in the Pacific Ocean on the opposite side of the International Date Line as Midway.

Perhaps you’ll find it amusing that this otherwise Christmas Day full moon is not happening on December 25 on Kiribati—also known as Christmas Island. It’ll be December 26 already there at 2:11AM. Well, anyway, the point to remember is that when the moon reaches full phase on a given date, it may be another date in another part of the world. To keep it simple, let’s use Universal Time.