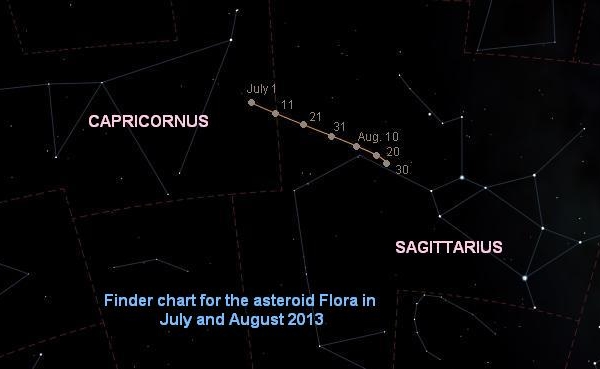 Almost a century ago, Japanese astronomer Kiyotsugu Hirayama studied asteroid orbits and found that although many asteroids were far from each other, their orbits were similar. He felt that if dozens or hundreds of similar objects orbit at about the same distance from the sun, in nearly identical ellipses, and in nearly the same plane, they can be thought of as being in their own class separate from other asteroids. It may be that very long ago these related asteroids broke apart from the same big object in a collision with something else big.

One clan of asteroids is called the Flora Family. Its largest member is Flora, the eighth asteroid ever discovered. More than 800 asteroids in the Flora Family orbit the sun about 2.2 astronomical units (Earth-Sun distances) from the sun. They are in the inner part of the asteroid belt between Mars and Jupiter.

Hirayama announced his work classifying asteroids into families in 1918. Although the Flora Family wasn’t among the first Hirayama grouped and named, he did get around to it. In the 1950s, NASA astronomer Dirk Brouwer thought he could divide the Flora Family into four subfamilies. Astronomers today disagree on dividing Flora’s family, but they generally agree about the Flora clan.

Flora is the biggest asteroid in the class. It’s 140 kilometers in diameter. The second largest is Ariadne at about 95 kilometers. The rest in this family are much smaller at less than 30 kilometers. The Flora Family makes up only about 5% of all the asteroids between Mars and Jupiter. It’s thought they broke apart from their parent body 500 million to one billion years ago.

The Flora asteroids, including Flora itself, are fairly bright. You can see Flora at opposition this month. It’s moving from night to night from Capricornus to Sagittarius. The asteroid is about ninth or eighth magnitude. In brightly lit urban areas, it will be hard to see. It will also be hard to see when it’s at opposition on the 19th, because the nearly full moon is a little west of it. The moon will be full when it passes 6.2° from Flora on the 23rd.

However, any clear dark night this month or next should provide one of the best views of Flora for all of 2013. Use binoculars or a low magnification telescope and study the area where the asteroid is. Look again the next night or a few nights later and try to notice anything that has moved. Keep doing this from night to night and tracking it will become easier as the fixed stars nearby become more familiar.