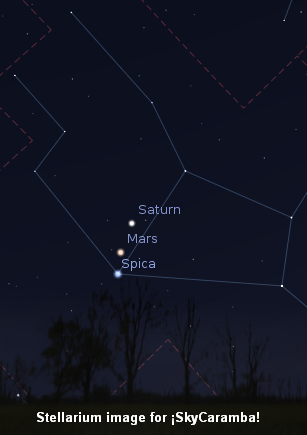 Saturn, Mars, and Spica form a little triangle in the west as evening twilight gives way to night. You’ll see Mars and Spica less than 2° from each other around the 14th as the red planet positions itself between the star and the ringed planet. Saturn’s moving in the same direction, but much more slowly and about three degrees farther from Spica. For the second half of the month, Mars is noticeably east of the other two. A young crescent moon joins the cluster on the 21st.

Sagittarius and Scorpio are in the south in the evening for northern hemisphere viewers, while Lyra and Cygnus pass overhead. Pegasus is rising in the east.

In the morning hours, you can see Jupiter just north of the V of the Hyades. Every bright Venus is below and to the left. Jupiter stays near the Hyades all month and greets a waning crescent moon on the 11th and 12th. After a couple nights travel between the two planets, the moon passes Venus on the 13th. Venus is at the feet of Gemini at that time. It’s also at its greatest elongation (its farthest in the sky from the sun) on the 15th. It will keep going. By the end of August, Venus will be on the other side of the constellation around the waistline. 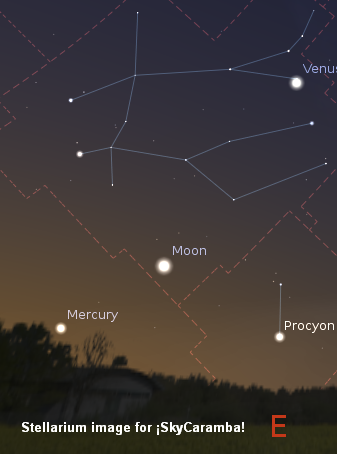 Sirius is rising with Canis Major before sunrise. To the north of it, is Mercury. The best view of our sun’s first planet will be around the 15th and 16th. It’s at its greatest elongation west of the sun and the moon will be nearby. Mercury will be below and left of the moon on the 15th, above and left of it on the 16th. Don’t confuse it for the star Procyon to the right of the moon.

This should be a good year for seeing Perseid meteors. The reliable shower produces meteors in many colors. Look on the mornings of the 11th, 12th, and 13th for the peak. You won’t miss seeing many because of the moon while it’s a thin crescent. You could see about 50 meteors per hour. That’s almost one per minute on average. Some Perseid meteors leave long trails. This is primarily a northern hemisphere shower because its radiant point is in Perseus and it’s a far northern constellation. Parent comet Swift-Tuttle left the trails the earth passes through for this shower. Some of those meteor trails are hundreds of years old. 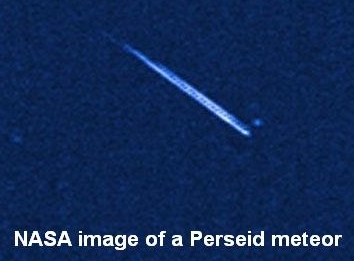 Images here made with Stellarium, except for the NASA image of the meteor.