October is another good month for planet watching. Whether you like to watch in the evening, around midnight, or as dawn approaches, there’s something for you.

Three planets are low in the west right after sunset. They are Mercury, Venus, and Saturn. The moon will help you find Mercury as it passes by the planet on the 6th. The next night, the moon is between Venus and Saturn. Then on the 8th, the moon is above Saturn. Your best chance to see Mercury is on the 9th when it’s at its farthest east of the sun this time around. This greatest elongation measures 25°. In its usual fashion, Mercury becomes hard to see just a few weeks later, so don’t expect to find it in the second half of the month.

Remember that the planets are moving against a backdrop of stars that is also moving. Venus will be by Antares around the 16th. The planet is clearly headed toward the teapot of Sagittarius by the end of the month. The constellation of the archer starts the month in the south (for northern hemisphere observers) at sunset. It’s in the southwest at sunset by the end of October.

Pegasus is rising as darkness sets in when October starts. You’ll see the constellation’s Great Square higher and higher each night.

Around midnight, Jupiter rises in Gemini. It’s close to a dim star named Wasat. On the 4th, the two will be just 0.1° apart! They’re separated by 0.5° on the 10th and a full degree on the 16th as the big planet moves eastward. You’ll see the moon in the neighborhood on the 24th and 25th.

Closer to dawn, you can spot Mars with the moon next to it on the 1st. The red planet is between Cancer and Leo. When Mars passes Leo’s bright star Regulus mid-month, the planet and star are 0.9° apart. Next time the moon passes Mars, the planet is south of Leo.

Depending on events that cannot be predicted, the Mars and Regulus show could be quite exciting as Comet C/2012 S1 (ISON) is near the star and then seems to travel alongside the planet in late October. Comet brightness is notoriously hard to anticipate. When a Russian astronomy team discovered Comet ISON a year ago, scientists thought it might be as bright as the naked eye planets by now. However, it hasn’t brightened up anywhere near that much. It’s getting closer to the sun and will be closest next month, so maybe that will help.

The moon will be new on the 5th, at first quarter on the 11th, full on the 18th, and at last quarter on the 26th. This month’s full moon comes with a penumbral eclipse. The moon will pass into the northern outer part of the earth’s shadow from 21:50 on the 18th to 1:50 on the 19th. Africa, Europe, the Indian Ocean, and the Atlantic will be great viewing spots for the entire event. Observers in western and central Asia will see the beginning of it. Most of the Americas will see the end.

And just a few other notes: Uranus is at opposition on the 3rd. It’s up all night. Venus is at aphelion the same day.

Below are some graphics (simulated with Stellarium) showing a few of the views you might expect this month. 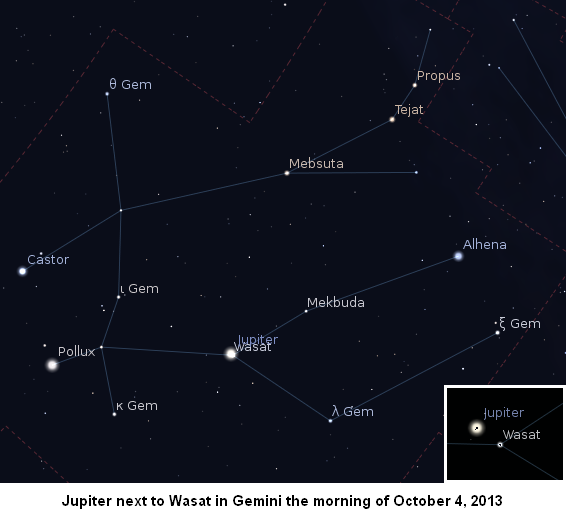 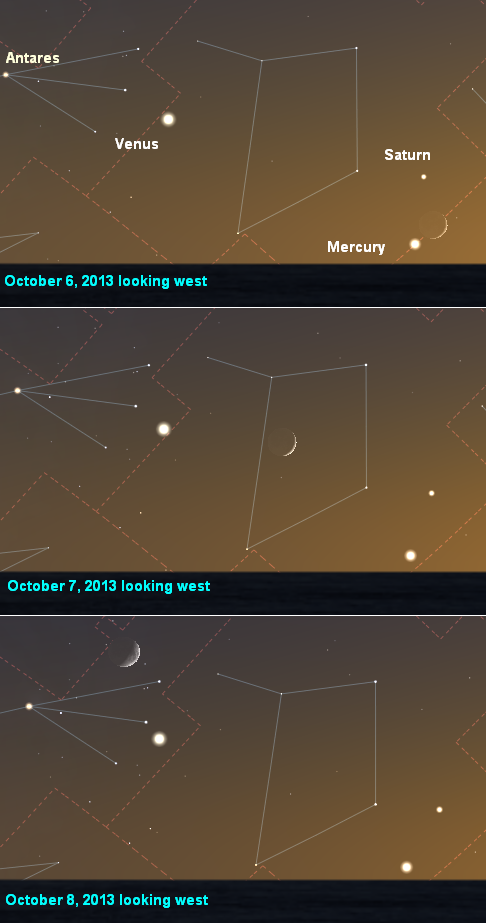