In astronomy, the credit for discovering something goes to the person who recognizes it for what it is. That’s not necessarily the person who saw it first. Some astronomical objects have been noted decades before they were discovered. The person who first saw Neptune died more than 200 years before someone discovered it.

We may never really know how many planets, comets, asteroids, and other objects have been seen one or more times before someone drew or photographed it. Astronomers see so many things when observing, they can’t keep track of them all. Even after a drawing or photograph is made, it may take years before someone makes another observation that leads to a discovery.

We can illustrate the situation quite well with Pluto. Working at Lowell Observatory in Arizona in 1930, Clyde Tombaugh took pictures of the sky and compared them to look for moving objects. He noticed something different in two pictures taken on January 23 and January 29. To further prove something in the photographs had moved, the Lowell administrators pulled out a picture from the same patch of sky taken on January 21 and found the object in yet another position .

If Tombaugh hadn’t been working for an observatory dedicated to finding a faint moving object, he might have overlooked Pluto. Perhaps his pictures would have sat unexamined and uncompared. Pluto had evaded detection that way already. Yerkes Observatory in Wisconsin photographed it on August 21, 1909 and again on November 11 the same year. No one noticed Pluto in the photographs until 2000. There are now 14 other known photographs of Pluto taken during the two decades before Lowell announced its discovery. 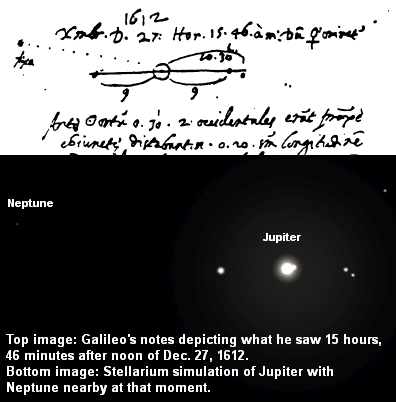 The search for prediscovery pictures of astronomical objects is called precovery. It’s interesting to marvel at how some astronomers have missed the fame someone else eventually enjoyed for a discovery. But more seriously, finding out exactly where an object was at various times long ago can help refine orbital calculations for it. Scientists may make judgments about changes in brightness. And learning why their predecessors overlooked discoveries can teach today’s astronomers how to avoid the same mistakes.

In many cases, the precovery period isn’t more than a few years. But the most extreme example spans centuries and involves the man who made the telescope famous. Tracking Jupiter from night to night in late 1612 and early 1613, Galileo made notes about one of the “stars” the planet passed near. He said it appeared to have moved. Indeed it did. But working long before photography, Galileo thought he probably had drawn it in the wrong place. He kept following Jupiter and left behind what is now called Neptune.

Over the next two centuries, several astronomers – some of them famous for skilled observation – also saw Neptune and didn’t recognize it as a planet until 1846. It’s possible that tonight someone sees or photographs some planet, asteroid, or comet not yet known to astronomers. Will that person get the glory of discovery or a footnote for precovery?