This year, February evenings start with Venus bright in the west at sunset and Jupiter a bit above it. Uranus is also above Venus and much closer to it. Venus climbs upward until it and Uranus meet just 0.3° apart on the 9th. From most places, you’ll need a telescope or binoculars to see Uranus just to the left. 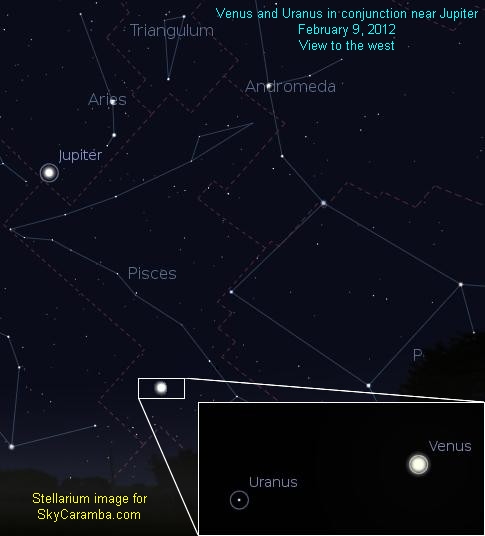 Venus quickly leaves Uranus behind, heading higher for a pairing with Jupiter next month. Venus and Jupiter will be close enough in late February for the moon to pass Venus on the 25th and Jupiter the next night.

If you have a telescope, this is a really good time to look at Mars. The views will be

the biggest and best they’ve been in about two years. And after the distance between us and the Red Planet begins growing again in March, it’ll look progressively smaller.

Mercury isn’t visible until late February in the west just after sunset. It’s in superior conjunction on the 7th. That means it’s on the other side of the sun.

Neptune is also in conjunction with the sun this month. Those who have dark enough skies and good enough optics can try to find it in the west shortly after sunset early in February. On the 1st, it will be just 17° east of the sun. The best chance of seeing it through the atmosphere above the horizon and the light wash from the sun is at about 14° north latitude. Dark sites in Nicaragua and the Philippines are in just the right place.

Neptune will be in conjunction on the 19th. If you could be in orbit around Neptune looking back at Earth at that time, you’d see Earth and the sun close to Regulus in Leo.