Aquila the eagle soars over us in July and August. By some ancient accounts, he was a vulture. In others, he was Zeus’s owner and kept his master’s thunderbolts 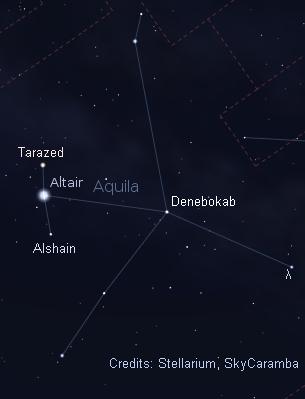 until they were needed. Zeus sometimes sent Aquila on special missions—a kidnapping in one case! European mythology has held the stars of Aquila to be a bird since around 1200 B.C. Naturally, Aquila’s bright star Altair is said to be the eagle’s eye.

In old India, Altair and the two bright stars it’s between were footprints left by the god Vishnu. The other two stars are Alshain and Tarazed. Both seem to be ancient Persian words for eagle.

Other Asian legends say Altair was a herdsman who fell in love with the princess Vega. They married and spent so much time romancing each other, Vega’s father put them on opposite sides of the celestial river (called the Milky Way in the west). That was the only way they’d get their work done. Altair and Vega are allowed to see each other once a year. The Japanese celebrate a festival of Tanabata to mark the occasion.

Altair is squashed. It rotates in just nine hours! All the rotational energy forces it to bulge at the equator. Its equatorial diameter almost 25% more than its polar diameter. 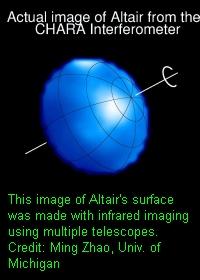 Altair’s also close and bright. Just 16.8 light years away, it’s one of the brightest stars in the sky. At the same distance as the sun, Altair would shine 11 times as bright. A lot of Altair’s energy makes it to Earth outside the visible spectrum. In 2006, it became the first star whose surface was photographed. Four infrared telescopes pointed at it gathered the image.

Another interesting feature of Altair is that it’s a variable star, but it’s one of the least variable in the sky. It takes some rather high tech equipment to detect the variations in brightness. They’re thought to happen partly because of pulsations that travel through the star material the way ripples travel through water. Helium atoms losing and regaining electrons are part of the explanation too. Helium transmits less light when it’s ionized.

Alshain is substantially dimmer than Altair. Alshain is about 45 light years away and has a very dim companion you might be able to find in your telescope. Yellow-orange Tarazed is much farther at around 461 light years. Denebokab is named for the eagle’s tail and actually marks where the tail begins. The end of the tail is bluish λ (Lambda) Aquilae shining from 125 light years away. All the other stars in Aquila have scientific designations but no old fashioned names. Most of the stars are dim and therefore didn’t get enough attention to capture imaginations millennia ago.

Aquila is already high in the east when the sun sets. It crosses the meridian around midnight. You can find it in the west as sunrise approaches. Aquila isn’t really watching you, but you can keep an eagle eye on him all night.