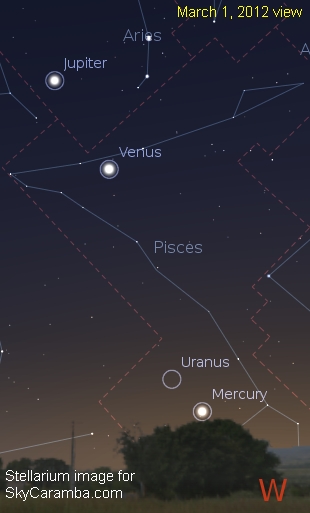 March starts with Mercury low in the west at sunset. It’s by the lower fish of Pisces. Venus is higher up between the two fish. Jupiter is higher yet and above both fish. The first quarter moon on the 1st happens at northern lunistice. That means the moon’s as far north as it goes in its orbit.

The moon goes on to a fairly close full phase on the 8th. It crosses the equator heading south that day. Two days later, the moon’s at perigee, 362,300 km away from Earth.

Mercury will climb for the first few nights of this month, helping those in the southern hemisphere see it better. But sunsets in the northern hemisphere are getting later each day and that doesn’t help observers there. In its real position, Mercury will be at its closest to the sun on the 3rd. However, the way things look in the sky, Mercury will be it farthest east of the sun on the 5th. Then it returns into the solar glare. 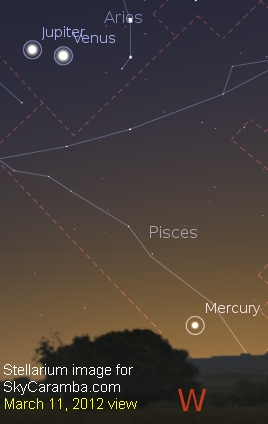 Venus is climbing too. It keeps going higher each evening almost until the end of the month. By the time Venus and Jupiter are side by side on the 12th, Mercury’s about at a standstill and ready to start going westward again. Venus keeps going and stays above Jupiter in the western sky for the rest of the month.

See the thin crescent moon to the right of Jupiter on the 25th. The moon will be slightly thicker and left of Venus the next night. Venus keeps climbing until it’s the farthest east it gets from the sun on the 27th. Venus appears to slow down a little but keeps climbing to a spot below the Pleiades at the end of March.

Mars is up all night this month. It’s at opposition on the 3rd, about two thirds of the distance from us as we are from the sun. This is the best time to see it in a telescope. You’ll find Mars below Leo rising in the east at sunset. The full moon 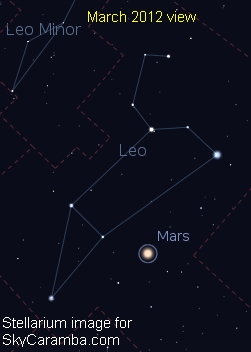 passes the planet on the 7th. Mars keeps going westward toward the star Regulus. It doesn’t affect the weather here, but the sun is at northern solstice on Mars on the 30th. Our own northward equinox is on the 20th.

Saturn rises in late evening east of the star Spica in Virgo. The ringed planet is moving slowly westward toward Spica. The waning gibbous moon passes Saturn on the 10th.

If you want to see Uranus, you may spot it most easily on the 4th. Mercury will be just 2.4° north (or to the right) of it. Mercury is many times brighter than Uranus and stands out better against the dusk’s light. Uranus is barely a naked eye object in the darkest skies, so it may be hard to find. 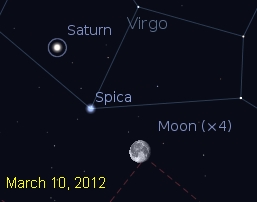 With all these things going on, this is a good month to be out stargazing and planet watching. ¡Sky Caramba!