The bright objects that rule the dawn this month include Venus, Jupiter, Betelgeuse, Sirius, and Procyon. 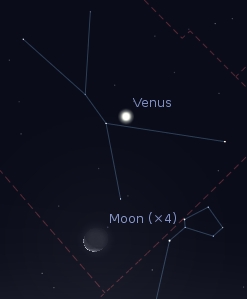 Venus is leaving Gemini, will pass through Cancer, and finish the month entering Leo where it will rendezvous with Regulus early in October. That will be a pairing to see. The star and the planet will be less than 0.2° apart on October 3rd. Leo becomes easier to see in the dawn as September carries on. The slow suspense builds.

Jupiter is practically at a standstill as September starts. It will remain north of the Hyades V all month. By the end of the month, the big planet will be stationary before retrograde motion begins in October.

At dusk, our triangle of Spica, Saturn, and Mars is getting hard to see. Two of its members will disappear into the sunset this month for those watching from the northern hemisphere. By the time you get a good view of Spica again, it will be in the morning sky in November and it will be part of another triangle with Saturn and Venus. Mars will stay visible in the evening sky very low over the western horizon for a very short time after sunset throughout September and October for northern hemisphere observers. Southern

hemisphere observers will see Mars separate out of the triangle and Mercury emerge into it very low over the horizon at the end of the month.

Uranus is at opposition on the 29th. Unfortunately, the moon is full the next night. Uranus, already hard to see 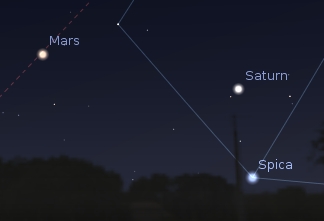 because it’s so dim, will be washed out by the bright moon nearby.

A last quarter moon will pass north of Aldebaran and then will nearly graze Jupiter on the 8th. If you happen to be in the Pacific Ocean west of South America, you’ll see the moon pass in front of Jupiter. The moon is occulting Jupiter like that about every four weeks through February, but you have to be in just the right place on Earth to see it.

A waning crescent moon will be close to Venus on the 12th. An even thinner crescent will pass south of Regulus on the 14th.

The moon is new on the 16th. Two days later, a very thin waxing crescent will be next to Mercury in the evening sky. As the crescent grows, it will pass by Saturn, then Mars. For a few people in eastern Brazil and the south Atlantic Ocean, the moon will occult the red planet. The moon’s almost at first quarter when it’s 5° north of Antares on the 21st.