A great square is rising these evenings. The four points of light that form it are part of Pegasus, a flying horse I told you about in a recent blog. There’s some ambiguity about the names of the stars in the square. They have also been used for other stars and the stars have been known by other names! Sometimes the experts disagree about what the names mean. 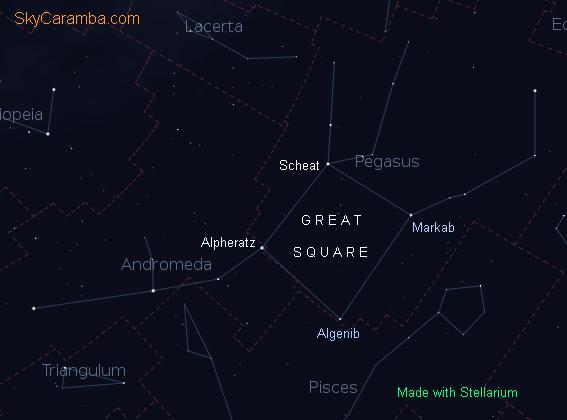 Let’s start with Alpheratz in the northeast corner. It’s actually in Andromeda according to modern constellation boundaries. The name means “horse’s shoulder” because historically it was part of Pegasus. When an astronomer a few generations ago drew the modern boundaries, he respected ancient traditions but didn’t give complete deference to them.

Alpheratz and other stars like it have so much mercury in them, scientists call them “chemically peculiar”. Bluish Alpheratz, 97 light years away, is a double star. The other star is much dimmer but can be observed by detecting spectral changes in the light.

Scheat is 200 light years away in the northwest corner. It’s a star some 95 times as big as the sun and about 1,500 times as bright. Even so, it’s cool for a star so bright. In classical drawings, Scheat is in one of the horse’s thighs. Nevertheless, the name means “the shin”.

It’s an irregular variable, meaning its brightness changes unpredictably. If you can begin watching Scheat now and for the next few months, you may see it brighten or dim just enough to notice. Scheat’s color is described as deep yellow, although scientifically it’s classified as a red giant.

In the southwest corner is Markab, shining from 140 light years off. The name may mean “horse’s shoulder” or “horse’s saddle”. Markab is thought to be rather far along in its lifespan about to become a red giant. Of course, stellar lifespans being so much longer than human lives, we shouldn’t expect to observe the change.

Algenib seems to be from Arabic for “the side”. But “the wing” is said almost the same way in Arabic and that meaning also makes sense. The Pegasus legend is of a flying horse, after all. Algenib marks the square’s southeast corner.

It’s 490 light years away. Algenib is thought to have a companion star orbiting it closer then Mercury orbits our sun.

The Great Square is easy to recognize and this is the best time of year to get to know it. You should be able to spot it easily in the east as darkness sets in. The four corners are second magnitude (rather bright) stars, so you can see them even in moderate light pollution or with a full moon.

If you recognize asterisms like the Great Square, they become your wayfinders as you make your way around the rest of the sky. And even though the Great Square is so easy to make out, you can probably impress several of your friends just by showing them where it is.