A growing crescent moon passes two bright objects in the western sky right after sunset at the end of August and beginning of September. It passes south of Saturn one night, south of Spica the next. You can see nearly the same show when the moon visits them again toward the end of September. On September 4th, a first quarter moon is almost as far south as the moon goes. It’s heading northward again and crossing the celestial equator just in time for a full moon on the 12th. The waning gibbous moon is 6° north of Aldebaran in the Hyades on the 19th. Just before last quarter on the 20th, the moon is as far north as it goes. It’s just a little south of the equator again by the next new moon on the 27th. 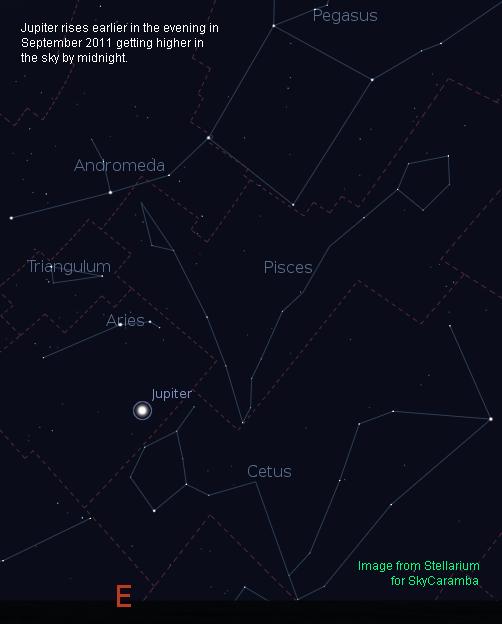 Jupiter is getting to be very high in the sky for those up in the dark morning hours. It’s moving eastward against the backdrop of stars, which are themselves moving eastward. Jupiter rises in late evening close to midnight at the start of September. By the end of the month it’ll rise in mid-evening. Many of you will be able to glimpse it in the evening twilight. A waning gibbous moon passes Jupiter on the 15th and 16th.

Mars stars September passing by Wasat in Gemini. On the 15th it’s almost on the modern constellation boundary line between Gemini and Cancer. 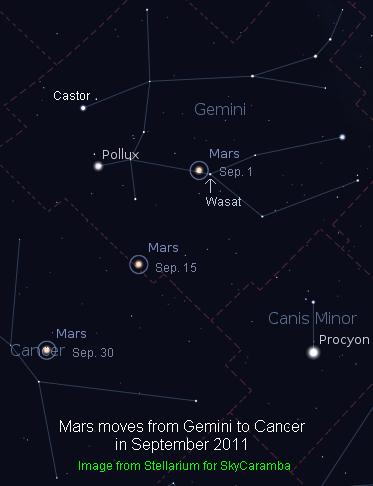 And on the 30th, the Red Planet visits the Beehive star cluster in Cancer. Take a look at that in the morning sky with a telescope if you can!

The equivalent of the March equinox is happening on Mars this month. On September 13th, the sun will shine directly over the Martian equator in the middle of its northward trek between solstices. Ten days later, it’s the September equinox on Earth with the sun heading southward.

If you missed the chance to easily spot Uranus when it was close to Jupiter over the winter, I highly recommend you use a program such as Stellarium to find out where Uranus is this month. It’s at opposition on the 25th. That means the planet is on the opposite side of Earth as the sun. Uranus is closest around that time and it’s up all night. A little light makes it hard to see Uranus. A nearly new moon won’t interfere, but city lights could. Uranus is in a part of the sky with a lot of dim constellations so a carefully planned hunt is important for finding it. It’s close to one of the fish heads in Pisces and south of the Great Square of Pegasus. 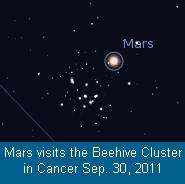 If you see meteors in September, they might be Piscids (radiating from a point in Pisces). Not many astronomers have observed Piscid meteors. Indeed, some astronomers think these meteors are part of another meteor shower or are just random meteors not part of any shower at all.

These are some of the astronomical events going on in September 2011. You can find more on the SkyCaramba events page at http://www.skycaramba.com/events.shtml.

Images on this page were made with the Stellarium planetarium program. 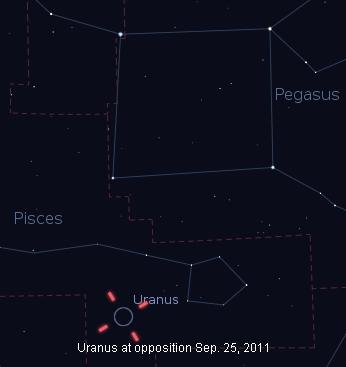