A great swan flies high overhead on northern summers. Cygnus has been recognized as a swan for thousands of years. And there are a few stories about how that swan got in the night sky.

One story says two friends racing across the sky got a little too close to the sun. Their chariots burned up and the pair fell. Cygnus, frantically searching for his friend, found him in a river unable to get out. Cygnus couldn’t swim well enough to rescue his friend and begged Zeus for help. Zeus turned Cygnus into a swan so Cygnus could keep swimming to rescue his friend. As a swan, Cygnus had a much shorter lifespan. In honor of the sacrifice, Zeus made an image of a swan in flight right over the Milky Way stream.

A slightly different version of that story says Apollo the sun god’s sun Phaethon asked to drive the sun’s chariot for a day but lost control of it. To keep the sun from careening out of control and destroying the earth, Apollo struck Phaethon with a thunderbolt. Phaethon’s lifeless body fell into the river Eridanus. Phaethon’s friend Cygnus dived repeatedly into the river to retrieve the body for a proper burial. Apollo, feeling pity, turned Cygnus into a swan.

Another legend says Zeus himself is the swan. Disguised as a swan, Zeus seduced Leda, the wife of Tyndareus who was the king of Sparta. Thus Zeus fathered Castor and Pollux (the twins of Gemini) and Helen of Troy.

If you turn Cygnus around it’s the Northern Cross. For most people today, the cross is a more familiar image than a swan in flight. Identifying animals was important to the ancients who saw a swan up there. The cross didn’t become an important religious symbol until centuries later. 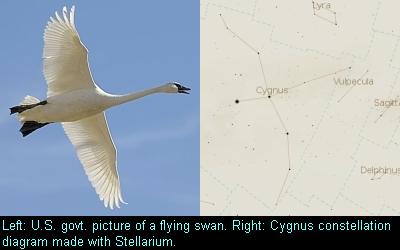 At the top of the cross, or the bottom of the swan, is Deneb. Deneb is Arabic for tail. Deneb’s one of the brightest known stars, not only in our night sky but in the galaxy generally. It shines brighter than most other objects in our sky and it’s 1,800 light years away.

At the bottom of the cross, or the head of the swan, is Albireo. To the naked eye, Albireo is just one star. But in a telescope it’s a most glorious double in complementary colors; Albireo A is orangish and Albireo B is blue. Opinions differ as to whether they’re orbiting each other or just happen to be close together. Each is about 390 light years away.

Looking between the stars of Cygnus with binoculars or a telescope will awe you even more. Countless dim stars in one of the Milky Way Galaxy’s spiral arms are waiting to dazzle you.

The heart of the swan will be overhead about midnight in early August. From middle northern latitudes it’s directly overhead. Cygnus can be seen very low to the north from middle southern latitudes. So in the southern hemisphere, you get to see two stellar crosses.