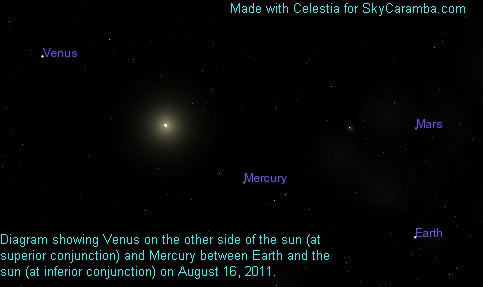 Mercury and Venus are in conjunction with the sun this week. That means they would all appear to be very close together in the sky if we could see them all. They’re actually far apart. Mercury is between us and the sun. Venus is on the far side of the sun.

Mercury and Venus are the so-called inferior planets. That’s not saying other planets are better. The term simply means they orbit the sun closer than the earth.

The orbits of the inferior planets make their apparent motion in our sky somewhat different than those of the superior planets. That different behavior earned them the inferior moniker 2,000 years ago. That was long before sky watchers had a modern astronomical understanding of why their motion is so different.

Because the inferior planets orbit closer to the sun than Earth, they never reach opposition. That’s the point in the sky where a planet is opposite the sun. So you will never hear of Mercury and Venus being up all night.

However far a planet seems to be from the sun on the dome of the sky, the distance is called its elongation. A planet at opposition is close to 180° from the sun. But Mercury and Venus never get anywhere near that mark. Mercury gets as far away as 27° and Venus gets to be about 46° at the most. Those points are called greatest elongation.

Because Mercury’s so close to the sun, its greatest elongations happen six to nine weeks apart. They alternate from morning to evening views and these are the best times to see the planet. Mercury’s next greatest elongation isn’t so great though. It’ll be just 18° from the sun in the morning sky on September 3.

Venus takes longer to go around the sun. It can have five months to over a year between greatest elongations. It’ll be highest in the evening sky 46° from the sun next March 27.

There’s another way the inferior planets are different. Look at them in a telescope and you’ll see them go through phases a lot like the moon does. Like the moon, sometimes the dark sides of Mercury and Venus are pointed toward us.

In the next few weeks, you may be able to see a white dot following its own path among the stars in the morning sky. Mercury will first move away from the sun, then toward it again. And over the next few months, you’ll see a bright white object emerging into the evening sky as Venus swings into view again.