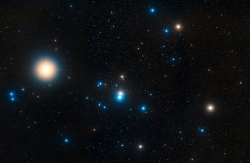 Look to the east tonight a few hours after sunset for an easy-to-spot V-shaped arrangement of stars called the Hyades. Of all the star clusters in the sky, the Hyades is the one closest to us. It’s about 150 light years away.

The bright orange star at the top of the easternmost stick of the V is called Aldebaran. The funny thing about Aldebaran’s placement is, it’s not actually part of the Hyades star cluster. It’s 65 light years away, so it’s closer to us than it is to the rest of the stars in the V. It just happens to be close enough in the line of sight with the rest of them, it looks like part of the same group—that asterism called the Hyades.

You can also look for the Hyades a couple hours after midnight high in the sky near the meridian, or closer to sunrise when the Hyades group is in the west.

The V outline of the Hyades represents the shape of a bull’s face. Aldebaran is supposed to be the red eye of Taurus.

In Greek mythology, the Hyades are the half-sisters of the Pleiades which are found nearby to the west. The Hyades nursed Zeus’s son Dionysus and were given a place in the sky as a reward. The legend says there were just five Hyades. If so, they are clearly overrepresented in the sky. With the naked eye you can see more than five. Several dozen are visible in binoculars or a telescope.