¡SkyCaramba! Weekly astronomy blog for the week ending May 30, 2015

One of the more complicated ancient legends to recall as the stars associated with it pass over us is that of Gemini. The twins’ Latin names are Castor and Pollux. In some accounts, they were both mortal. In others, they were both immortal. And in others, Castor is mortal and Pollux is immortal. Whichever story you prefer, they’re both remembered together as a constellation now.

In the versions of the story where only Pollux is immortal, they are usually half-brothers. Pollux is the son of Zeus and Castor the son of a mortal man. They are inseparable nevertheless. When Castor is killed in battle, Pollux is so distraught, Zeus agrees to reuinite them. They are allowed to be together again forever. But they may only be in heaven half the time. The rest of the time they must go to the underworld. That’s one way of explaining why the stars disappear under the horizon and then rise above it later.

The constellation Gemini looks somewhat like a stretched tall Greek letter pi. Pollux is the twin on the left and Castor is the one on the right. The stars that represent their heads also bear the twins’ names. At Pollux’s waistline is Wasat. At his feet is Alhena. At Castor’s waistline is Mebsuta. Tejat and Propus are stars in his feet.

Gemini sets early in the evening in May. And this year, Venus travels among its stars. The planet is between the twins on May 23, on a line between Wasat and Pollux on the 27th, and next to Kappa Geminorum on the 30th. Venus will keep moving quickly eastward into the stars of Cancer after that. So while some ancient Greeks may have described the situation as the twins returning to the underworld a little sooner each night, Venus would be under no obligation to stay with them for the journey. 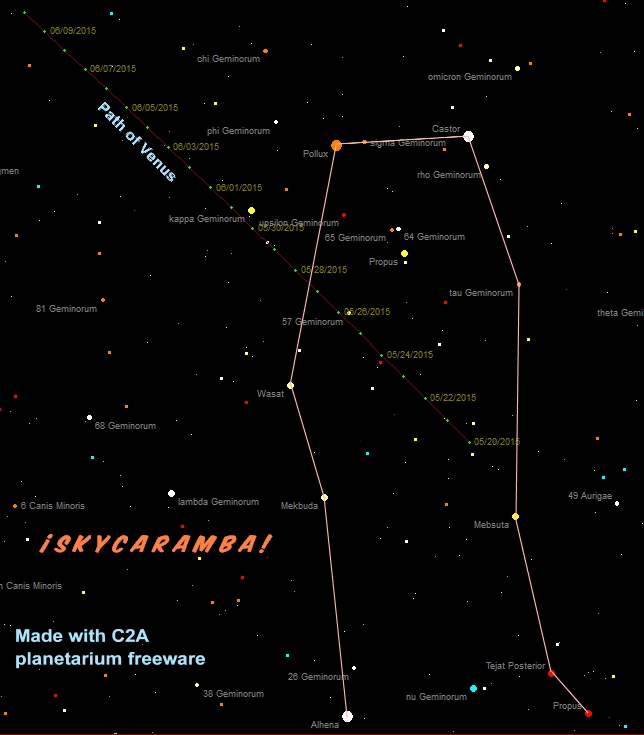