Storytellers explaining stars and constellations have told of heroism, hardship, and heartache of all kinds for thousands of years. For Valentines Day, let’s talk about a few love stories. 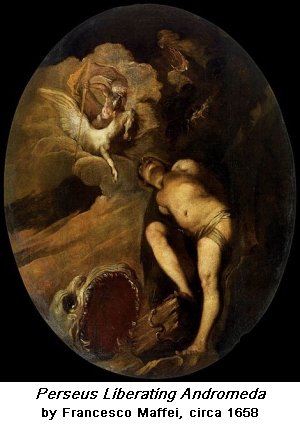 Two romantic partners visible for most of the year in the northern hemisphere are Perseus and Andromeda. During his return from a successful trip to kill Medusa, Perseus spotted a beautiful young woman chained to a seaside rock. He rescued her and learned she’d been tied there by her parents, King Cepheus and Queen Cassiopeia.

Poseidon had sent the sea monster Cetus to destroy Cepheus’s kingdom as punishment for Cassiopeia boasting about how beautiful Andromeda was. An oracle advised them to sacrifice their daughter. Perseus found another way out. He killed Cetus. Then he asked to marry Andromeda.

However, Andromeda had already been promised to her uncle Phineus. So Perseus had to kill him too. Perseus and Andromeda are still together today going around the north celestial pole together.

Various Chinese legends tell of a weaver girl and a cow herder who fell in love. For reasons that vary from story to story, the girl’s parents weren’t happy about the relationship. The more time the two spent together, the more her parents objected. 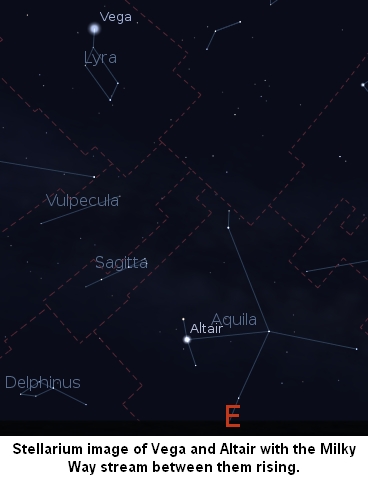 In one version of events, the girl’s family are immortal gods and the cow herder comes from a line of mortal people. The gods didn’t like romantic mingling between immortal and mortal beings. In another version, the parents liked their daughter’s love interest just fine. But they didn’t like how the two spent so much time together, she neglected her weaving and he neglected his herd.

In all the stories, the parents arrange to separate the lovers. In the tale of the gods and mortals, a river is carved between the two. In the version where the parents want the work to get done, the boy and his herd are put on one side of a river, while the girl and her loom are kept on the other.

Also in all the stories, the lovers get to spend one night per year together. Magpies sympathize with them and flock so closely together as to form a bridge over the river on that night. There are yearly celebrations designed around this story in China and Japan.

You’re looking upon the weaver girl when you look at Vega. The cowherd is Altair. Between them is the Milky Way Galaxy spiral that makes a fair river. This time of year, you can see them in the morning before sunrise.

The Pleiades are called the Seven Sisters, even though most naked eye observers see only six. Dozens more stars are visible in the cluster through binoculars or a telescope. Scientists sometimes debate whether one of 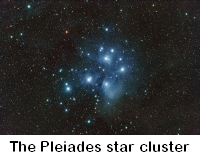 the dimmer stars once burned much brighter. Storytellers have other explanations for the discrepancy.

One is that Merope is hiding her face. Unlike her sisters, she is the only goddess in the family to marry a mortal and she isn’t respected for it. Neither is Merope’s husband represented in the sky. For he is Sisyphus, condemned by Zeus to forever roll a stone up a hill in Hades only to watch it roll down again when he almost gets it to the top.

In mid-February, the Pleiades are high in the sky at sunset and set close to midnight.

Orion and the Pleiades

There’s a story about the great hunter Orion falling in love with the seven sisters. He was after them for 12 years. Zeus turned him and them into stars. Orion can chase the Pleiades forever, but he can’t ever catch them.

You’ll find Orion also high in the sky at sunset this time of year, a little east of the sisters. He’ll follow them across the celestial dome to beyond the horizon.