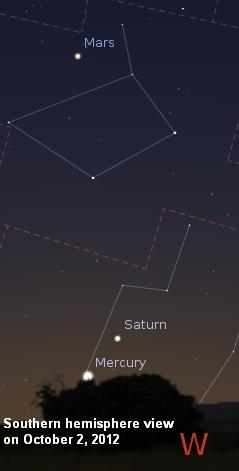 Next time you see Saturn will be in about two months in the morning. See Mars now if you can. Don’t confuse Arcturus, a bright orange star in the same area of the sky, with Mars. Aquila the Eagle is flying high on the meridian at sundown. The moon, just past full and beginning to wane, will join us in the east.

Jupiter is a mid-evening riser at the start of October. It’s still near the Hyades V and Aldebaran. The moon will be in their company on the 4th and 5th. Some people luckily situated in the far southern Indian Ocean southwest of Australia on the 5th will see the moon pass right in front of Jupiter.  Jupiter won’t appear to have moved much when the moon is closing in for another visit on the 31st.

Venus dazzles the east in the morning and has a very close call with Regular, the bright star at the heart of Leo the lion in early October. On the 3rd, the two will be separated by just 0.2°. A telescope at low magnification should show them both in the same field of view. Venus will be gibbous to slightly less than full. Look at this pair every day if you can. You may be surprised by how fast Venus moves. When it passes by a bright star, it seems to move even faster. By the end of the month, Venus is well below Leo, but still shining before sunrise. 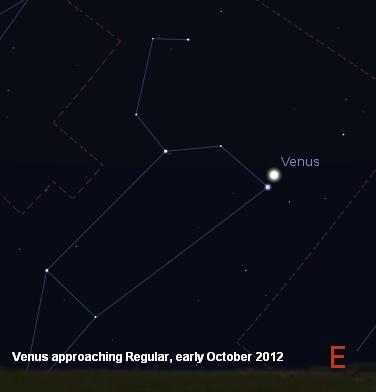 The Orionids meteor shower will peak October 20th through 24th. Look toward the east after midnight to see them. The moon will be set then. This shower has produced up to 70 meteors per hour and it’s hard to know when the peak will happen. In fact, there may be several peaks as the earth passes through several old trails left behind by Comet Halley. When you see an Orionid meteor, you are seeing a piece of rock that that came off Halley’s Comet perhaps several hundreds of years ago.

Many people in northern temperate climates appreciate stargazing in October. The nights are getting longer. Clear nights seem clearer. And it’s not terribly cold yet. It’s as good a month as any to get out there and start getting to know the stars above.