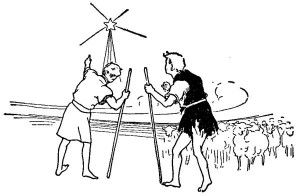 A popular question this time of year is about the Star of Bethlehem. People wonder just what it was. One explanation says it’s just a tall tale that made its way into Christian scriptures. Another says it was an atmospheric phenomenon called St. Elmo’s Fire. And another says it was something only the wise men who traveled to Bethlehem could see because God wanted only them to see it. Other explanations look to astronomy and astrology.

Looking for long ago astronomical events is easy with modern computing. Knowing what astrologers thought is a challenge though. And divergent historical records confound us as we try to put things on a timeline.

Let’s remember that the Christian year count wasn’t used anywhere until a papal scholar estimated 532 years to have passed since Jesus Christ’s birth. He’s now thought to have erred by perhaps a decade. So as we impose years prior to A.D. 532 on the past, we find that Jesus was likely already walking and talking in 1 B.C. when our intuitive reckoning would have us thinking he wasn’t born yet.

Now our discussion can include astronomical events that happened as far back as about 12 B.C. Halley’s Comet made an appearance in 12 B.C. Only a few historians think it was a likely Star of Bethlehem though.

Many scholars speak of the “triple conjunction” of Jupiter and Saturn in 7 B.C. Every year or so, Jupiter and Saturn appear to slow down in their usual west-to-east motion, then go the other way, and then resume west-to-east motion. Most of the time, they’re not together in the sky and they don’t go through these motions at the same time. But in 7 B.C., they were very close together in the sky and appeared to move like dance partners. They passed each other three times before pulling apart.

There was plenty of other interesting planet watching during 7 B.C. Mercury, Saturn, Jupiter, and the moon were in a cluster together in the evening sky at the end of January and beginning of February. Two weeks later, Mercury was sunward bound but Venus had arrived for a close call with Jupiter. Venus and Saturn paired up a week later while Jupiter vanished in sunglow and Mercury emerged in the morning sky. At the end of March, early rising sky watchers could see Saturn, Mercury, Jupiter, and the moon together. The Jupiter-Saturn conjunctions happened in late May, early October, and early December.

From September of 3 B.C to May of 2 B.C., Jupiter’s back and forth motion took it by the star Regulus three times. A few people have thought this may have been the heavenly sign.

A more intriguing possibility is an extremely close conjunction of Jupiter and Venus on June 17, 2 B.C. The two were so close, they appeared to unite as one object to the unaided eye.

If you’re willing to consider the possibility that the Star of Bethlehem actually may have been a coincidence of non-stellar events, let me tell you what happened on March 23, 5 B.C. There was an equinox and a very long total lunar eclipse. The sun traveled along the celestial equator by day. While the moon followed along exactly the same path at night, it spent an hour and 42 minutes–almost as much time as it can–in the darkness of Earth’s shadow.

We may never know if any of these events caused any celestial observers from an eastern land to travel in search of a new king. But for one reason or another, people have long felt they can understand what happens down here by looking up there.