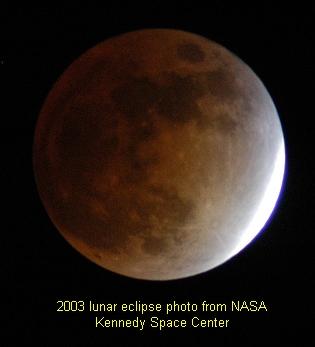 Nearly the entire eastern hemisphere will get treated to a fantastic total lunar eclipse next week. As total lunar eclipses go, this one’s almost as long as they get. The moon passes very far into the earth’s shadow. And the more shadow it goes through, the longer the eclipse. The total phase of the June 15 eclipse lasts 100 minutes! 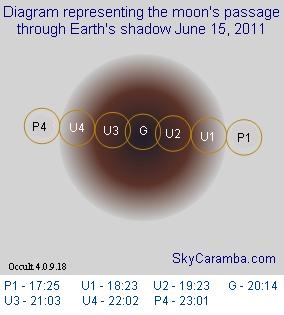 The penumbral phase begins at 17:25. That’s when the moon is in the fringes of the earth’s shadow. The earth blocks some sunlight from reaching the moon. If you were on the moon when it happened, you’d see a partial eclipse of the sun. Since sunlight passes through the earth’s atmosphere to reach the moon during the penumbral phase, you may see the moon take on a red or orange tint.

The total phase starts at 19:23 and lasts until 21:03. During that time, the moon is completely within the umbra, but the moon doesn’t disappear from view. A little sunlight, bent by the earth’s atmosphere, does make it to the moon. From the moon, the earth would have a sunrise or sunset colored ring around it. That red or orange light shines on the moon giving it an unusual and dark color.

What color the moon will appear is the least predictable part of a lunar eclipse. If it’s very deeply red, astronomers may try to link it to airborne volcanic ash or forest fire smoke. In recent years, some lunar eclipse watchers have reported seeing a bluish-green color. That’s believed to be the effect of ozone in the earth’s air.

As the moon heads out of the shadow, the partial eclipse ends at 22:02 and the penumbral phase ends at 23:01.

No special viewing equipment is needed to enjoy a lunar eclipse. All you need is a clear enough sky, but some people enjoy an enhanced view with binoculars or a telescope. Look around the sky during the eclipse. When the moon’s darkest, dimmer stars or the Milky Way stream will be more visible.

An animation at TimeandDate.com: http://www.timeanddate.com/eclipse/solar-eclipse-june-1-2011.html