The closest full moon of 2013 occurs on June 23 at 11:33 Universal Time. That’s just 15 minutes after the moon goes through perigee, the closest point in the moon’s orbit around Earth. The perigee distance from center to center of each body will be 356,900 kilometers.

This perigee is happening between the two closest apogees of the year. The apogee is the point at which the moon is farthest from Earth during it orbit. The June 9 and July 7 apogees will be 406,500 kilometers center to center. 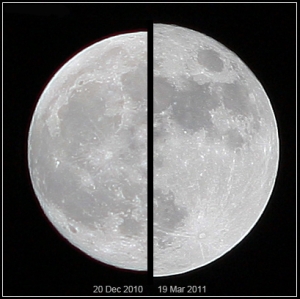 Some have begun calling the closest full moon of the year the “supermoon”. That’s a term an astrologer began using in 1979, presumably to claim that the moon’s influence on human behavior would be strongest at such a time. SkyCaramba doesn’t endorse astrology, but asserts one way astronomical events influence human behavior: when interesting things happen, people talk about them and try to see them.

You can’t really notice how much closer or brighter the full moon is during a supermoon with the naked eye alone. But astronomers who take pictures of full moons can compare them and measure the size difference. There are also astronomical instruments that measure the apparent size of an object and such measurements can be compared. If you live near an ocean, you may also notice that the high tides are the highest and the low tides are the lowest close to a supermoon.

While the supermoon isn’t as visually interesting as the name might suggest, any time is as good as any to look at the moon in a telescope or binoculars. Look at the craters and the dark areas that were once thought to be seas. If you look carefully with high magnification at the moon’s rim, you’ll see mountains. During a total solar eclipse, the spaces between the mountains allow a little light from the sun’s disk to pass. The phenomenon is called Bailey’s Beads.

If you get to know the sights of the moon’s rim very well, you can observe the full moon every month and see that sometimes the moon is turned a little closer to us on one side and farther on the other. This wobble is called libration. Even though we understand the same side of the moon is facing us at all times, we can actually see 59% of the moon’s surface from Earth because of libration.

Whether supermoon means anything to you or not, enjoy the view. ¡SkyCaramba!

The image above is from Wikimedia Commons. Here are some links to more information about supermoons.