November starts with Jupiter and Mercury together between Libra and Scorpius as the sun sets. Saturn continues its reign at the top of the teapot of Sagittarius. Mars is in the eastern part of Capricornus. All four of these planets are evening objects. 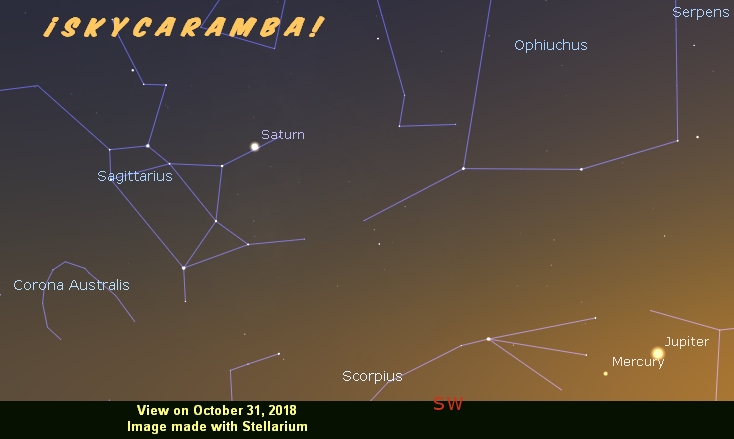 For northern hemisphere observers, there’s a zoo of constellations in the southern part of the sky and overhead. There are the aforementioned Capricornus, Aquila, Equuleus, Delphinus, Vulpecula, Lacerta, and Pegasus. They are a goat, an eagle, a horse, a dolphin, a fox, a lizard, and a flying horse, respectively. To the west of them, Ophiuchus holds his snakes. To the east are the fish named Pisces and Aries the ram. If that’s not enough of a menagerie, watch Taurus the bull rising in early evening and wait until mid-evening when Cetus the whale has risen. Around midnight you can see Lepus the hare rising along with Monoceros the unicorn. Monoceros is flanked by Canis Major and Canis Minor, the big dog and the little dog, respectively. Before the sun rises, you should see the head of Hydra and perhaps the stars of Corvus the crow. 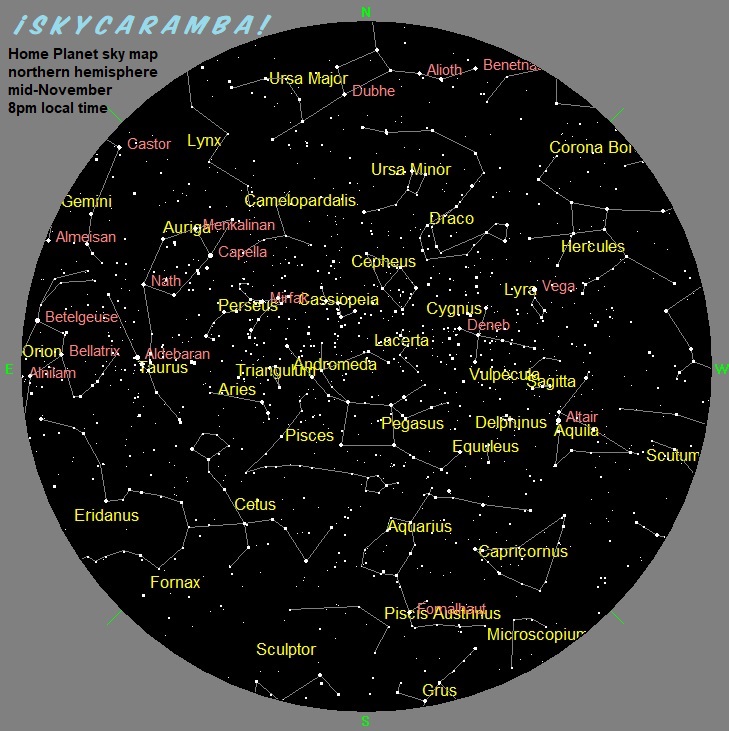 Venus is a morning object rising not long before the sun. A waning crescent moon is left of it on the 6th. The planet is moving toward the star Spica and will be closest at mid-month. Their closest call of 1.2° apart occurs on the 14th. But they do not pass due north and south of each other in either the ecliptic or equatorial systems. If they were on the same celestial longitude line, they’d be in conjunction in the ecliptic coordinate system. And if they were on the same right ascension line, the conjunction would be in the equatorial system. This is merely a conjunction of angular distance and one that many astronomers wouldn’t consider a true conjunction. By the end of the month, Venus is retreating. 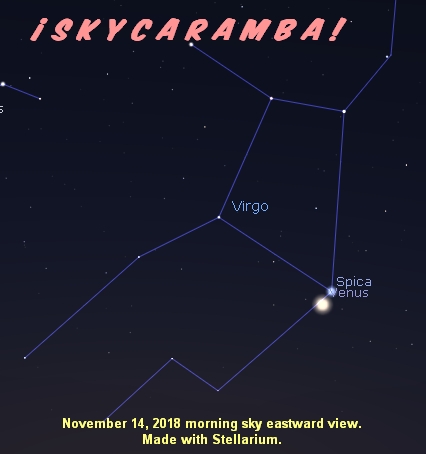 As November progresses, Jupiter drops into the sunset. Mercury avoids that for a week or so into the month. It is at greatest elongation 23.3° east of the sun on the 6th. A thin crescent moon to the right of it on the 8th will help identify the planet. The moon is thicker and close to Saturn on the 11th. A first quarter moon approaches Mars on the 15th. The red planet is heading into Aquarius already. Mercury is much harder to spot by then, especially for northern hemisphere sky watchers as the planet is heading into the sunset. Mercury is at perihelion on the 29th. 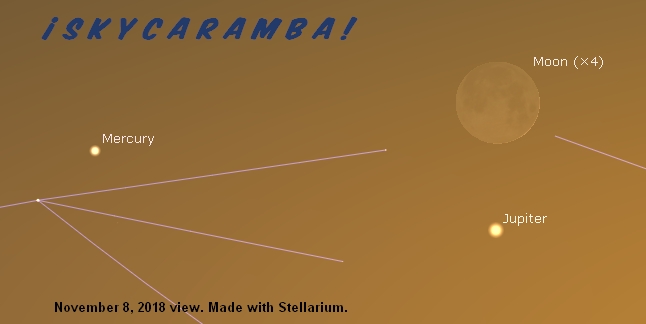 Mars will be deep in Aquarius by the end of November. On its way there, some viewers on the far southern tip of South America or on the ocean nearby can see the moon hide the red planet on the 16th.

The moon will not interfere with the Taurid meteor shower peak on the 5th and 6th. This is a minor shower that produces five to ten meteors per hour. The Leonids peak on the 17th and 18th. The moon is waxing gibbous, so the best views will be after midnight when the moon has set.