Except for when the moon is in the neighborhood, Venus is the brightest object in the western sky in the evenings this month. You’ll see it first. As darkness sets in, look for Sirius, Betelgeuse, Aldebaran, Capella, and Procyon too. Venus starts May a little right and above the Hyades. It passes near a star called Alnath in Auriga around the middle of the month and is at the feet of Castor a few days later. To be clear, we’re talking about the feet of the twin Castor, not the star Castor which represents that twin’s head. It is at the star Mebsuta in Castor’s waist on the 27th. Venus will keep on moving into the Pollux stars in early June. Pollux is the other twin in Gemini and his head is also represented by a star named for the twin.

Similarly in the east after sunset, Jupiter is the brightest object except for when the moon is near. The moon just past full rises shortly after the planet on the 1st. Jupiter is in the diamond of Libra. In early June it will leave the diamond near Zubenelgenubi. Keep watching in the months ahead and you’ll see Jupiter return to Libra. The big planet is an all night object this month. Opposition is on the 9th.

Saturn rises around midnight and Mars a little later. The ringed planet remains above the teapot in Sagittarius. The red planet starts May a little east of the archer constellation but is entering Capricornus by the end of the month.

Try to spot Mercury passing through Pisces before sunrise in May. It was at its best showing for greatest elongation at the end of April from around 20° to 25° south. The view stays good for most of May from the low to mid southern latitudes. The most interesting view will be on the 13th when Uranus is about 2.2° north of Mercury and a thin crescent moon is near. Mercury is advancing into the glow of sunrise and is very hard to see by the end of May. 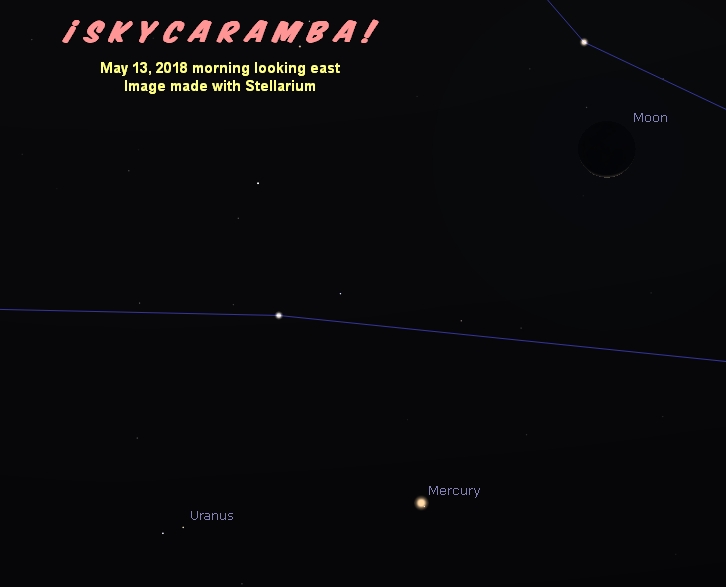