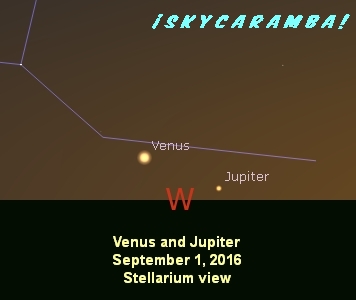 Jupiter and Venus are separating in the evening sky after sunset after that remarkably close conjunction on August 27 and 28. Both are barely above the horizon. Venus is going leftward or to the south. It will stay above the horizon just after sunset all month while Jupiter gets lost in dusk’s glare. Find a thin crescent moon between them on the 3rd. Venus will be above Spica on the 20th.

To the south at sunset, look for Saturn and Mars above Antares. The ringed planet appears to hold still from night to night in comparison to the red star. The red planet, however, is heading eastward fast. As the whole group is deeper into the southwest at sunset later into September, watch the moon go through the neighborhood on the 9th and 10th. Mars will be out of Scorpio’s claws and over the “teapot” of Sagittarius by the end of the month.

Mercury starts September as an evening object, but don’t expect an easy time seeing it. Your best chance is later in the month after it has emerged from solar conjunction in the morning beneath the belly of Leo. The best views are around the 28th. The messenger planet is at perihelion that day. Although it is physically closest to the sun that day, it appears to be farthest from the sun from our perspective that same day. Its greatest elongation this time is 17.9° west of the sun. 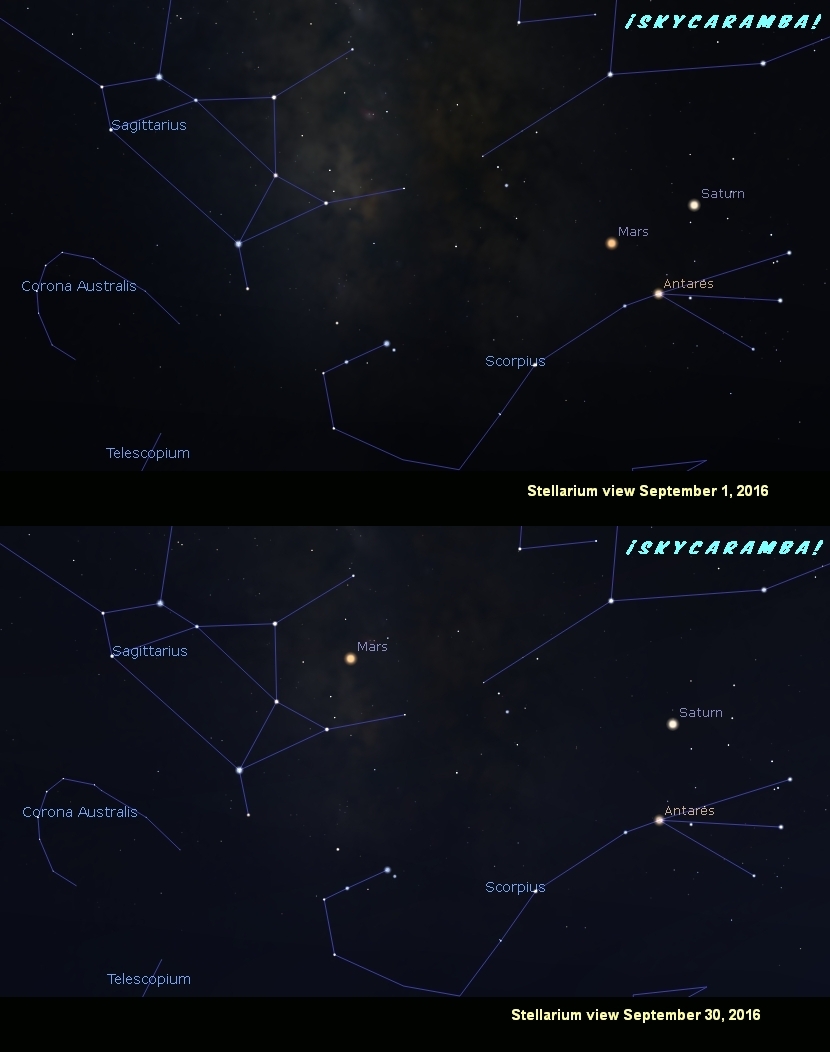 The moon passes in front of the sun on September 1. An annular eclipse will be visible from a path that stretches across Gabon, both countries using the name Congo, Tanzania, Mozambique, and Madagascar. Partial phases are visible from most of Africa, part of the Arabian peninsula, and ocean areas around the African continent. The Recife region of Brazil can see just a minute or two of the eclipse at sunrise and the west coast of Australia can see just a few minutes of it at sunset. This is not an eclipse that you can safely view without eye protection. Plan to project an image of the sun or use a viewing filter made specifically for looking at the sun. 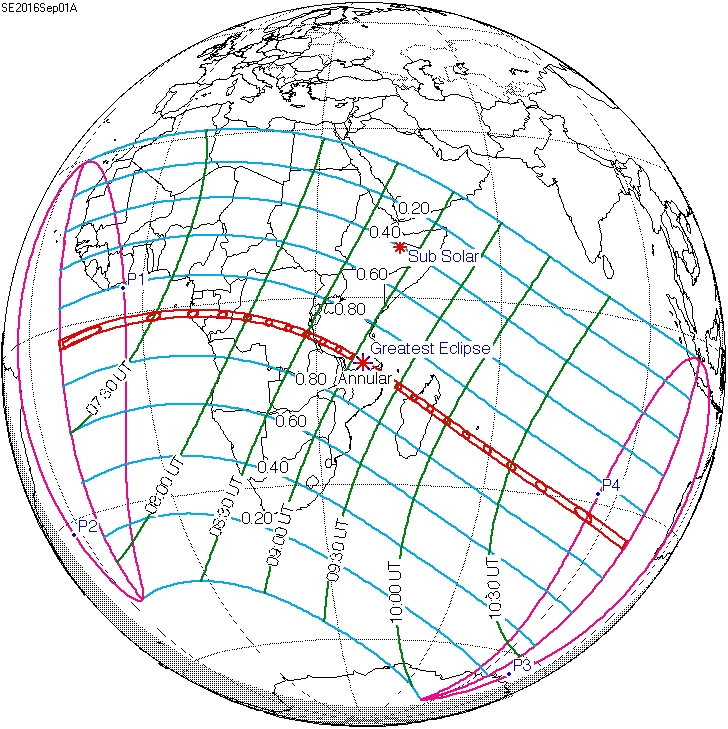 The moon will pass through the earth’s penumbra on the 16th and 17th. The visibility region will cover nearly all of the eastern half of Antarctica, far eastern Brazil, eastern Greenland, all of Africa, Europe, and Australia, and all of Asia except for part of Russia near the Bering Strait. The Indian Ocean, the eastern Atlantic, and the western Pacific will get the view too as the moon dims just a little. Perhaps it will change colors just a little.

After new moon on the 1st, first quarter is on the 9th, full moon on the 16th, and last quarter on the 23rd. The moon is nearly new again at the end of the month.

The moon occults Venus on the 3rd. That’s visible from northwest Russia and several places in the Arctic including Svalbard and Novaya Zemlya. 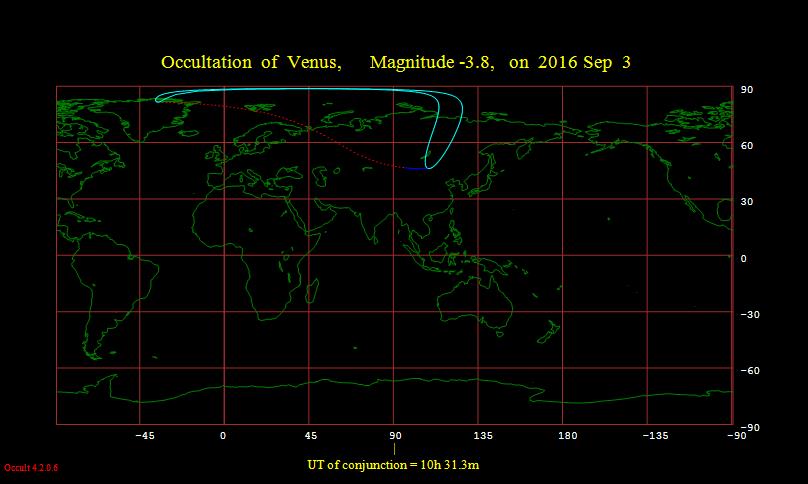 Visibility map for the moon occulting Venus on September 3, 2016 (made with IOTA’s Occult)

The moon passes in front of Aldebaran on the 21st. The event is visible from east central Africa and southwest Asia. 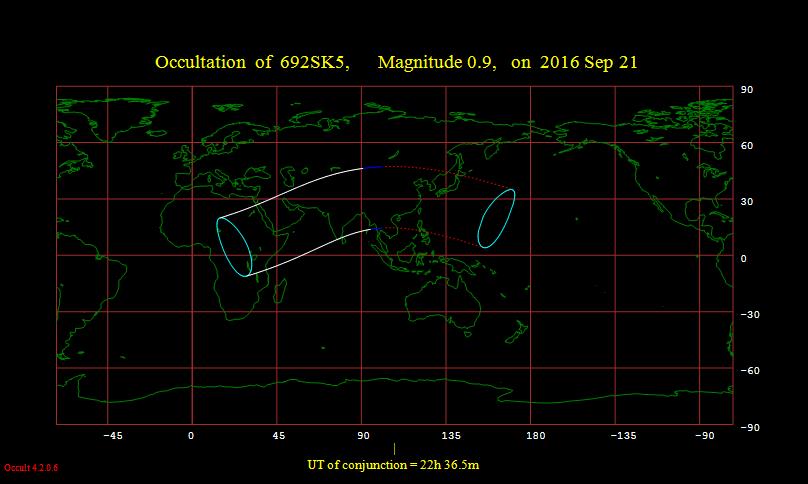 Visibility map for the moon occulting Aldebaran on September 21, 2016 (made with IOTA’s Occult)

Neptune is at opposition on the 2nd.