As May starts, Orion sets shortly after the sun. The twins of Gemini are above him. Leo is just past the meridian with Jupiter at his belly. Virgo is high and still rising. Arcturus is high in the east.

Jupiter is just about holding still in the sky when May starts, but it moves eastward after a few days for the rest of the month A waxing gibbous moon passes the planet on the 15th.

Mars and Saturn rise in mid-evening. Both are moving westward, the red planet faster than the ringed planet. They are going through the claws of Scorpio. Spot Mars between Acrab and Dschubba on the 19th. A full moon is north of Mars on the 22nd and approaching Saturn. Since Mars is in the neighborhood all month, you can easily compare it to its starry rival Antares. To the ancient Greeks, Mars was Ares. The name of the red star that mimics it literally means rival of Mars. Jack Horkheimer of Stargazer (formerly Star Hustler) said he was glad that when the Romans renamed the planet they didn’t similarly rename the star to Antmars.

Mars is at opposition on May 22nd. Saturn will be on June 3. It’s another way of saying they’re up all night and at their closest viewing. So they’ll look as good as they get in a telescope.

Venus continues to be unusually—but not very—hard to see this month. It seems to hover near the same place relative to and near the sun in the morning sky. It’s bright enough to recognize though.

For more of a challenge, try spotting Mercury. It’s an evening object on May 1. The best latitude to view it from is 25° north where it will set an hour after the sun. But it’s heading sunward fast. It goes through conjunction on the 9th. It passes slightly less than a full moon width from Venus in the morning sky on the 13th and 14th. The best views in the morning are from 20° south. 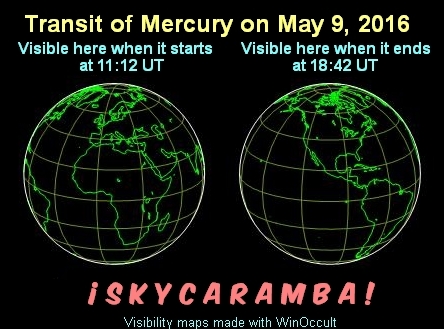 But let’s talk more about that conjunction. Mercury isn’t just passing between the sun and Earth. It’s passing directly between the sun and Earth! People in western Asia, Africa, Europe, the Atlantic Ocean, the Americas, and most of the Pacific will see a little black dot on the sun as the planet crosses the solar disk. It is a somewhat rare occurrence. This last happened in 2006 and will happen again in 2019. View safely so you have a chance to see it again. Don’t ever look directly at the sun or point a telescope at it without using filters specially made to protect your eyes and equipment.

The moon will be just past new when the Eta Aquarid meteor shower peaks on May 5 and 6. It’s best seen from the southern hemisphere where the meteors may appear at rates of 60 per hour.

By some accounts, the May 21 full moon is called a blue moon. It fits the tradition for calling it such if it’s the third of four full moons in a season.

The moon occults Aldebaran on the 8th for viewers in northeast Asia. 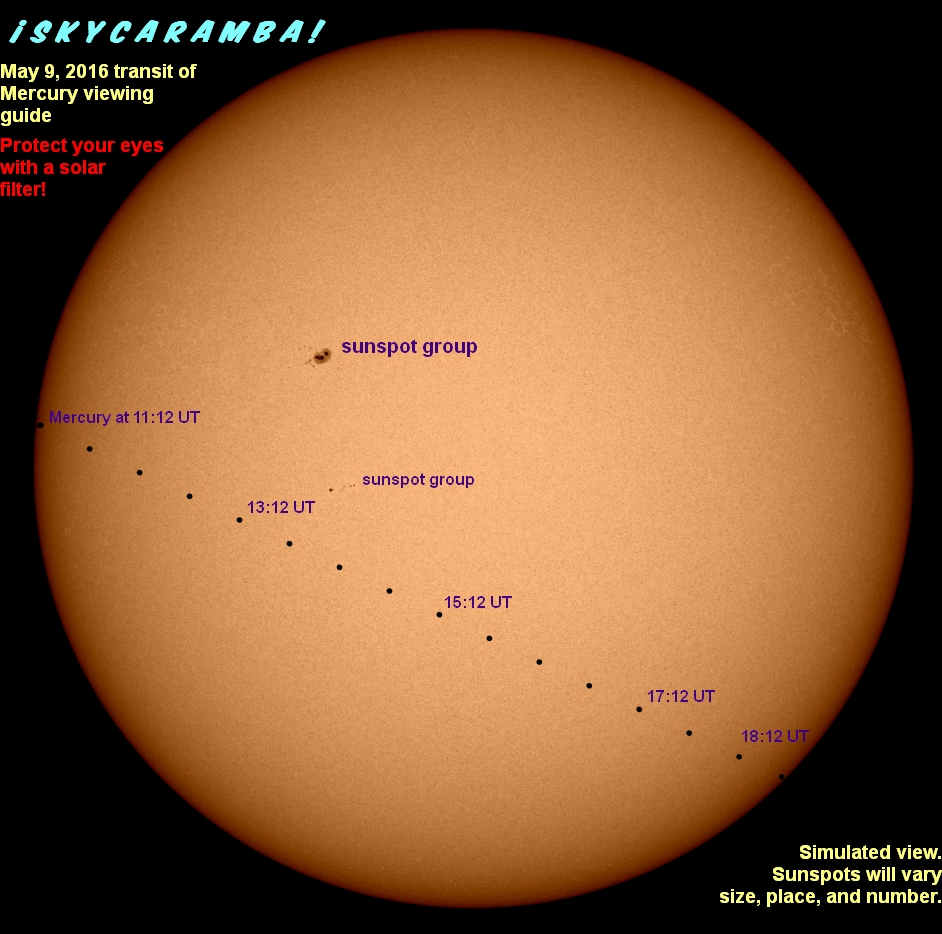