In March, Leo rises as darkness sets in. Gemini is a little higher in the east and Orion higher still. Pisces is setting, and you’ll find Mars and Venus alongside the eastern fish at the start of the month. Look for Mars to pass right of a star called Torcularis Septentrionalis and left of another star called Kullat Nunu around the 7th. (Remember those two stars for another visit later this month.) Look for Venus, which has been following Mars in the sky, to change course. It goes retrograde on the 2nd and is heading toward the sun. Venus will be at inferior conjunction on the 23rd. The red planet, however, continues going upward until it’s between Cetus and Aries late in the month.

Early March is a good time to spot Uranus. Get your binoculars or a telescope and go to a dark sky for the best chance. Mars is to the right of the faint blue dot at the start of the month. Another good opportunity to spot the sixth planet comes later in the month when Mercury has shown up in our evening sky. The messenger planet reaches into Pisces and passes right of Uranus on the 26th. You can see Mercury between Torcularis Septentrionalis and Kullat Nunu at the end of March.

Look to the right of this scene to see the Great Square of Pegasus–or at least part of it. The Great Square is setting at sunset as March begins. As the month goes on, more of it has already set at sunset. Also, more of it has risen already by sunrise. Finally, you should be able to see just as much of it before sunrise at the end of the month as you did after sunset when the month started. Seeing it both ways helps us understand how our sun and planetary neighbors are moving against a background of distant stars. 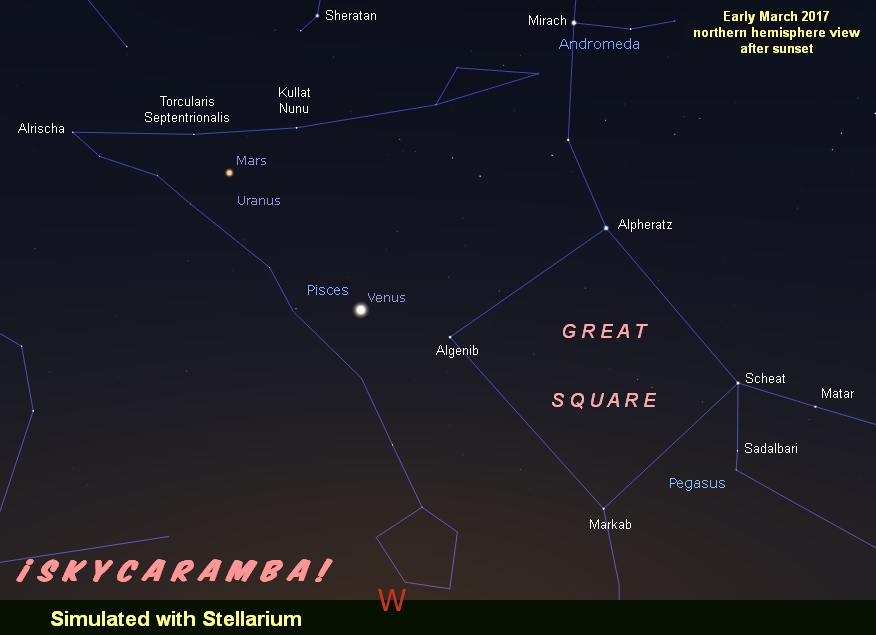 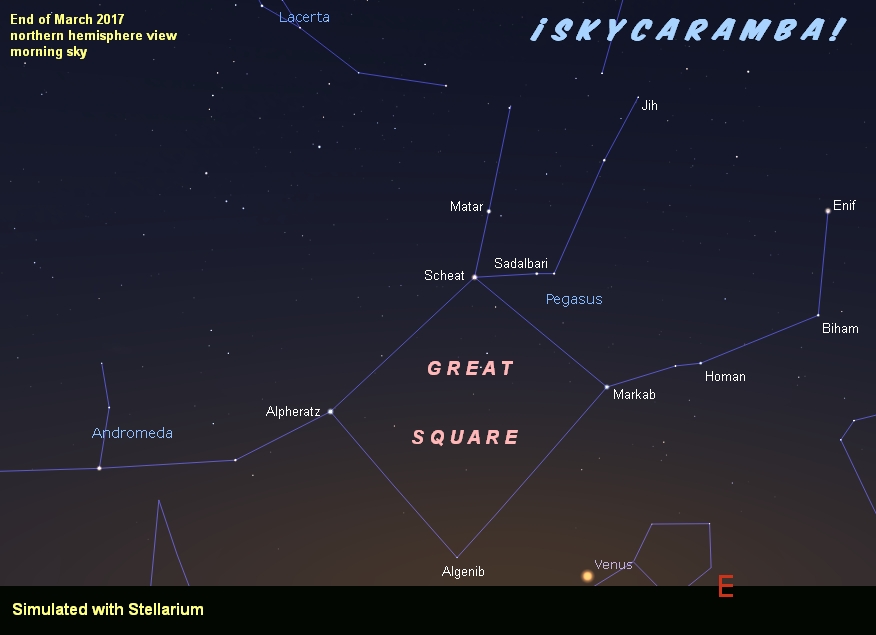 Jupiter rises in the evening in Virgo. The big planet doesn’t move much from its spot near Spica. 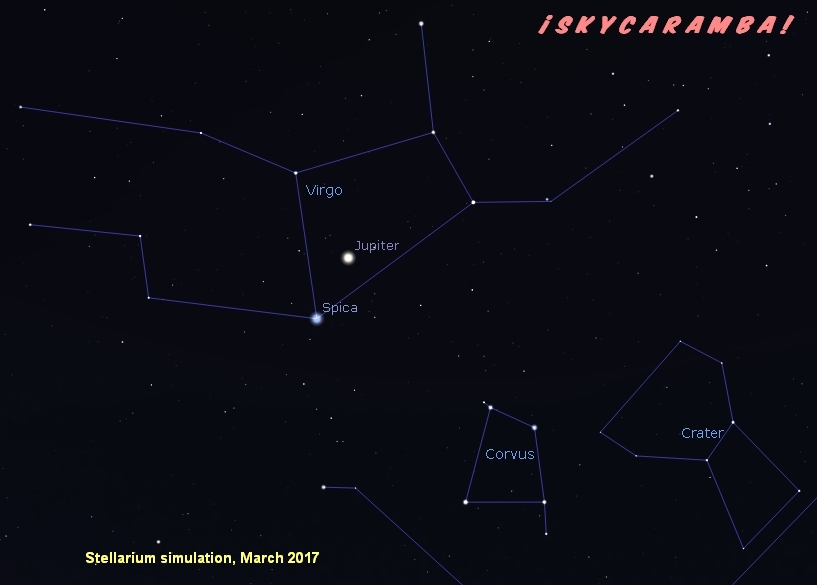 Saturn is a morning object between Sagittarius and Ophiuchus. The ringed planet also isn’t moving much this month. It’s starting March in direct motion but “goes stationary” not long into the month. 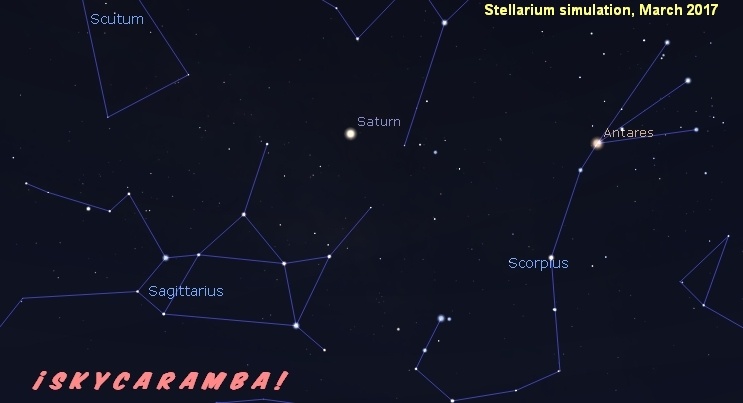 If you didn’t get to see Venus in the evening sky early in March, look for it reemerging as a morning object in the last few days of the month.

The moon is at first quarter on the 5th, is full on the 12th, is at last quarter on the 20th, and is new on the 28th. The moon is at northern lunistice on the 7th, goes south of the equator on the 13th, reaches southern lunistice on the 21st, and goes north again on the 28th. There are two lunar perigees this month, on the 3rd and 30th. Apogee is on the 18th.

Mercury is at perihelion on the 23rd.

The moon occults Aldebaran, the bright orange star in the Hyades, on the 5th for viewers in the continental United States and Central America. On the 10th, viewers in the Cape Town area of South Africa, the South Pacific Ocean, and the Queen Maud Land part of Antarctica can observe an occultation of Regulus. 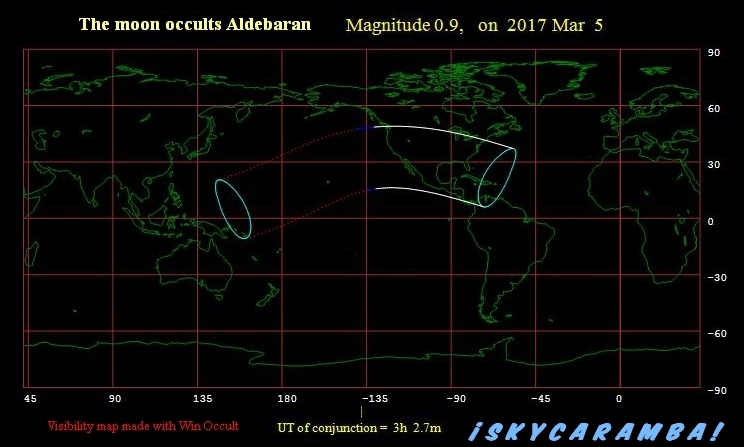 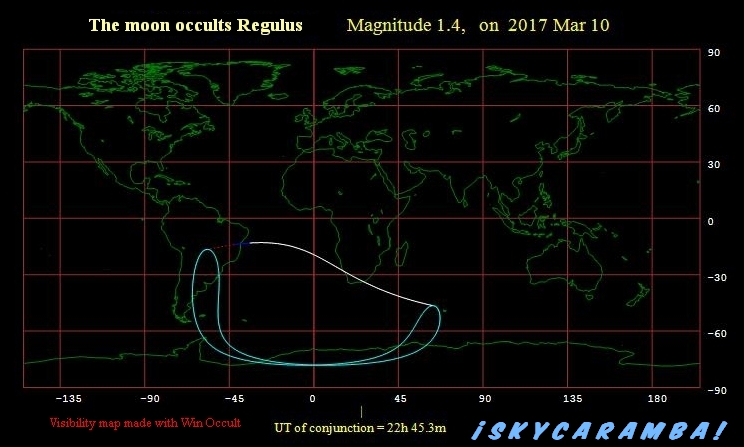