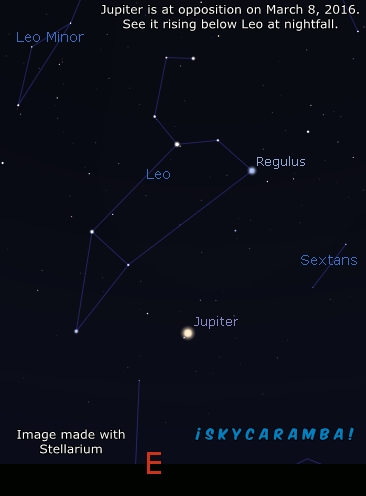 March starts with just one naked eye planet visible at sunset. Jupiter is rising just below Leo. It will stay in about the same place all month. Opposition for Jupiter is on the 8th. It’s 4.435 astronomical units from Earth on the date.

Boötes and Virgo rise a few hours later in the evening. Mars is a midnight riser as March starts. You’ll see it below Libra. On the 1st, a last quarter moon rises below Mars. The red planet moves eastward all month and passes very close to Acrab in Scorpio on the 16th. Mars passes the star and continues moving toward Saturn. The moon passes Mars on the 28th and Saturn on the 29th. This is not the first visit between the moon and the ringed planet this month. The first occurs on the morning of the 2nd. Saturn appears nearly stationary all month close to Antares. The planet begins retrograde motion on the 25th.

Venus and then Mercury rise a little before the sun at the start of the month. Both are heading sunward, but just Mercury will cross to the evening sky by the end of the month. The best morning views of the two planets will be from the southern hemisphere in the first week of March. Mercury becomes hard to see after that. It goes through superior conjunction on the 23rd. Try to find it in the evening sky a week or so later. Venus will need longer to show up there. It’s farther from the sun, so it moves slower. It’s also at aphelion on the 20th, so it’s moving slowest this month. A thin crescent moon is next to Venus on the 7th.

A total solar eclipse occurs on March 9. The path of totality crosses mostly ocean. It starts west of Indonesia, crosses parts of Indonesia, heads northeast to pass northwest of the Hawaiian islands, and ends north-northeast of the Hawaiian islands. At the point of its greatest duration, totality will last 4 minutes, 9 seconds. Partial phases will be visible from southern Asia to most of Australia at the start of the event. Japan, Malaysia, and some other Pacific islands get it a little while later. Hawaii and the Aleutians are among the last to see the event at the end of its approximately four hour run.

Visibility map for the March 9, 2016 total solar eclipse. From Fred Espenak of NASA. Click the image to see it full size.

Typically less exciting, a penumbral lunar eclipse will occur on the 23rd. Most of Asia, all of Australia and the Pacific Ocean, and most of the Americas will have the moon above their horizons when it passes through the earth’s outer shadow. Watch for the moon to dim a little. Perhaps it will change color a little too during the time from 9:39 to 13:55.

People in southern Asia can see the moon pass in front of Aldebaran on the 14th. 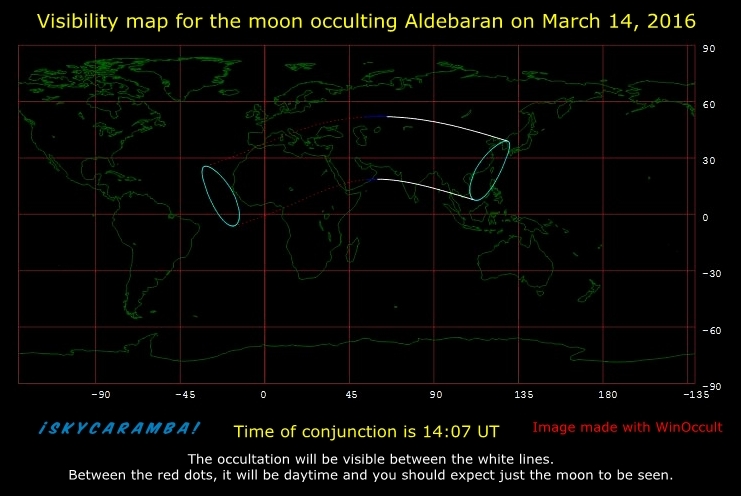