When June starts, Saturn is up all night. It’s at opposition on the 3rd. You’ll see the ringed planet rising just under Mars in the east as the sun goes down. Don’t confuse Mars with Antares which has nearly the same red color. The red planet rises a little before the red star and is higher than Saturn. You’ll see bluish-white Spica even higher, close to the meridian. Jupiter is west of the meridian, but still high enough to be up for most of the evening. Stars getting read to set in early evening are Pollux, Castor, and Capella.

With a dark enough sky, you might find Uranus in Pisces before sunrise.

Mercury starts the month as a morning object. The best views are at low latitudes where it’s up almost an hour before the sun. A very thin moon passes the messenger planet on the 3rd. A few people in the southern Atlantic on or near South Georgia Island will see the moon pass in front of the planet. Despite being at greatest elongation 24° from the sun on the 5th, it’s not easy to see from higher northern latitudes. After that, Mercury moves sunward as the month goes on.

Venus is also a morning object when the month starts, but it’s too close to the sun to see. Try to spot it in the evening later in June after it goes through superior conjunction on the 6th. It won’t be much easier though until a few more weeks.

You’ll see Mars and Saturn moving westward this month. Mars is moving faster than Saturn until it becomes almost stationary as it enters the diamond of Libra. Watch the moon near Mars on the 17th and 18th and near Saturn on the 19th.

Jupiter is moving eastward beneath Leo. A first quarter moon passes by on the 12th. 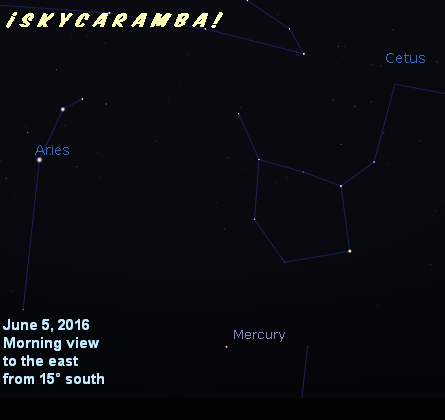 The full moon and the June solstice are both on the 20th, about 12 hours apart.

You should expect to hear news about the Juno mission to study Jupiter. As the craft approaches the big planet to settle into an orbit around it in July, there should be news of approach pictures, equipment tests, and the like.